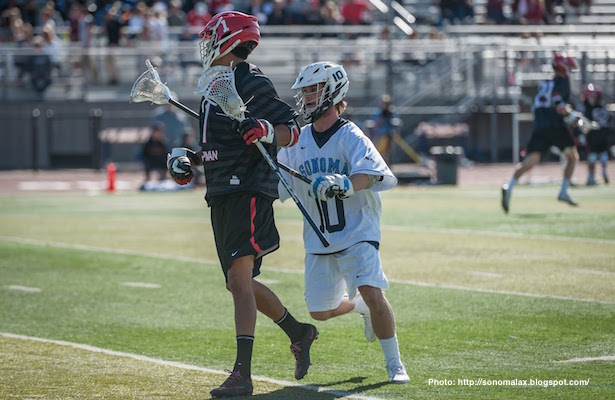 In addition to being right around the corner, Chapman features Steve Koressel (Huntington Beach), Parker Core (El Toro).  Koressel has 51 goals this season including the five he scored against Georgia Tech in the semi-final.  Core earned Southwest Lacrosse Conference All-Freshman Team honors.

Much like the season as whole, Chapman (21-0) has shown both dominance and resiliency in arriving at the title game. After blasting past both Purdue and Arizona State, the Panthers rebounded in the second half against a gritty Georgia Tech squad in the semifinals to post an 11-9 win.

Chapman was led by the one-two attackman punch of senior Steve Koressel (Huntington Beach, 5g) and junior Wesley Greason (3g), letting sophomore Dylan Garner – who carried the Panthers in the first two games with a combined 11 goals and three assists – have a rest.

The semifinals allowed Cal Poly (17-1) to avenge its lone blemish on the season. The Mustangs fell to Grand Canyon in late February in triple overtime, but humbled the defending national championships on Thursday with an impressive, 10-8 showing.

It sets up a championship game that is more about similarities than contrasts. Well, kind of.

Both coaches have slightly different interpretations of the same matchup.

“As far as similarities go, we both have an attack driven offense, we both have a veteran goalie and athletic midfields,” said Cal Poly coach Bobby Dabrieo. “One difference is they play at a faster pace than we normally do. Their defensive midfielders push transition better than any other team I’ve seen this year.”

“Cal Poly and us are very similar across the board,” added Dallas Hartley. “Both teams are deep, fast, and pride themselves on hard work and teamwork. They tend to rely on their midfield to initiate most of their offense, whereas we initiate more with our attack.”

With as many shared traits that the two teams have, this contest could very well come down to motivation and tactical adjustments. How will the coaches send their teams out on the field?

“Get out there and do what we’ve done to win all season,” Hartley said. “Contest all ground balls, play defense as a team and work for quality shots offensively.”

“My message to the team would be that we must match their tenacity on ground balls and we must be patient on offense as well as our clears,” added Dabrieo.

The team that puts it all together will earn its first-ever MCLA championship while the loser will be bridesmaid once again. Chapman has made two previous appearances in the finals (2008, ’09) while Cal Poly missed on their chance in 2012.