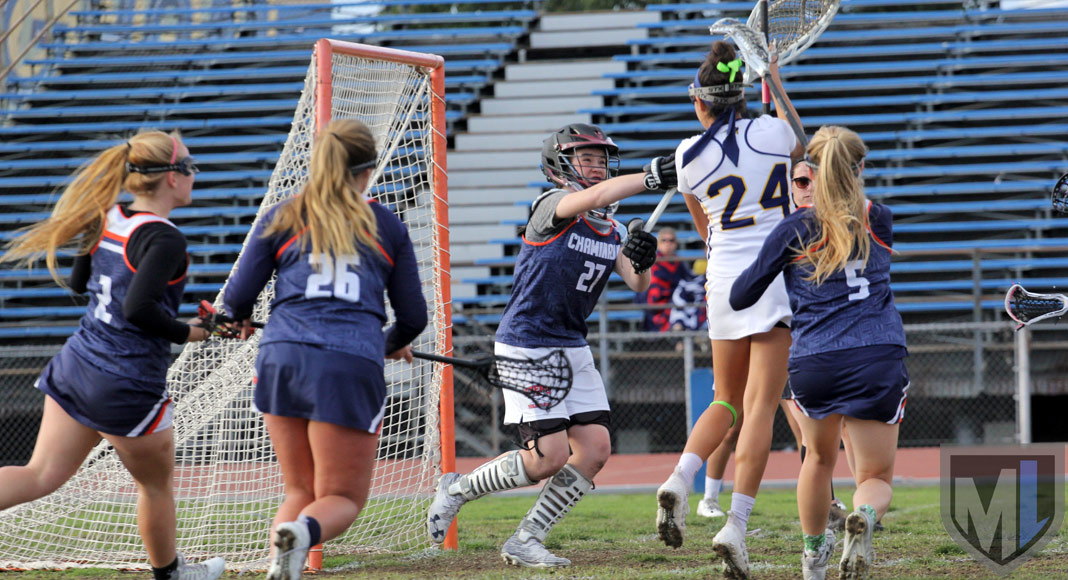 Chaminade goalie Maddie Grass made nine saves and midfielder Cate Mackel scored four goals Saturday, helping the No. 2 Eagles to a 9-5 victory over No. 8 Birmingham in the Gold Bracket title game at the Birmingham Lax Bash.

It was the second year in a row that Chaminade has defeated the host Patriots in the Gold championship at the event, which is in its seventh year. Organized and run by Birmingham coach Scott Silva, the Bash this year featured 20 teams in three divisions.

“I can’t say enough about this tournament,” Chaminade coach Scott Cohen said. “It’s so well run. Coach Silva does a great job. It’s a long day for the girls, but it’s so positive.”

Chaminade reached the title game with wins over Woodbridge 11-2 and Royal 11-4, and Cohen credited Grass and the defense with both victories. Grass averaged seven saves in those first two wins, and the defense held Royal’s Holly Hall scoreless and surrendered only one to Highlanders senior Dominique Surabian.

Birmingham reached the title game with wins over Newbury Park 8-6 and Marlborough 8-5. Against Chaminade and goalie Grass, though, the Patriots struggled to score.

“She’s new to us, so we don’t know much about her,” Silva said of the Eagles’ goalie, “and she did very well in saving a lot of our shots. We just couldn’t find the back of the net today.”

Chaminade took an early 2-0 lead and built the margin to 7-2 at halftime and 8-2 to open the second half.

Mackel, a senior bound for Elon University, finished with four goals and three assists against Birmingham. In three games Saturday, she compiled 12 goals and 14 assists.

This week, all the teams who participated get back to regular-season action and full-length games that count in the standings. Birmingham plays at new program El Camino and at City Section rival no. 15 Palisades on Wednesday. Chaminade plays at home against No. 1 Redondo Union on Tuesday and at No. 4 Oak Park on Friday.