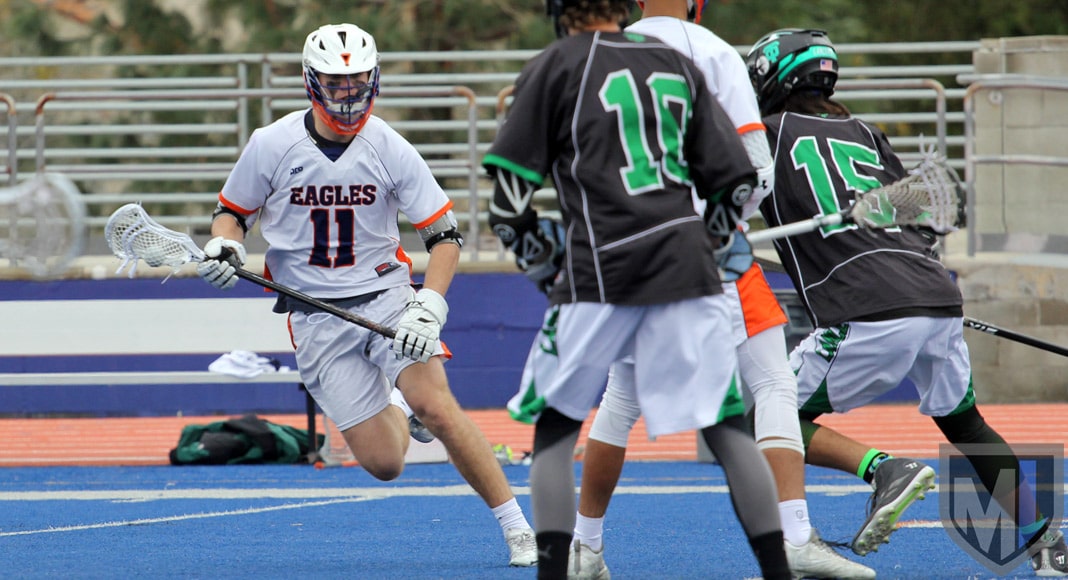 Ninth-ranked Chaminade capitalized on two first-quarter extra-man opportunities Saturday to build an early lead and went on defeat visiting No. 7 Thousand Oaks 13-8. It was the second victory this week over a Marmonte League team that was ranked ahead of the Eagles in the US Lacrosse/MaxLaxLA coaches poll. Tuesday, they held off a late rally by No. 4 Agoura to win 8-7.

“We’re winning, which is nice,” Chaminade coach Steve Lane said, “but we have a lot of things to continue to improve upon. But early in the season, finding a way to win is always a positive.”

Against Agoura on Tuesday, the Eagles (3-0) nearly surrendered a five-goal lead in the fourth quarter but escaped with a win. Against T.O. on Saturday, Lane said they occasionally lost track of the Lancers’ top offensive weapons and allowed T.O. to hang around.

The Eagles led 3-0 late in the first period, 6-3 at halftime, and were ahead 8-5 with four minutes to play in the third period. Nick Riggio (4 goals) and Drew Conlon (3g, 1a) kept the Lancers in it with all five of T.O.’s goals to that point.

“They have a couple of key players, so the goal was to put a focus on them, which we didn’t do well in the first half,” Lane said, “but we just buckled down and got a little more disciplined, just playing better as a team. If we play as a team, we’re good, but if one guy screws up, they’ll find the opening, and they did.”

After Conlon’s man-up goal with 3:54 left in the third pulled the Lancers to within 8-5, Chaminade rattled off four goals in a row in the span of seven minutes to make it 12-5 and essentially put the game away with eight minutes left.

Riggio and Conlon led the Lancers (0-3), with Nick Ditto (1g, 1a) and Sage Molina (1a) also contributing. Senior face-off middie Matt Parham won 18 of 22 at the face-off X, but even with the possession edge the Lancers were unable to generate much offense.

It was the third loss in a row for T.O., which faces a brutal schedule over the next three weeks. With losses to the OC’s San Clemente and the Mission League’s Harvard Westlake and Chaminade already in the books, T.O. faces two-time defending section champion Loyola at home on Tuesday, then plays, in order: at defending OC champ Foothill (March 10); at No. 5 Oaks Christian (March 14); home vs. No. 2 Palos Verdes (March 19); and home vs. No. 4 Agoura (March 21).

Chaminade plays at Oaks Christian on Friday, their third Marmonte League opponent in a row. Against Agoura on Tuesday, Lane said his team played well for more than three quarters but lost focus down the stretch.

“The last five minutes of the game, we started getting penalties and lost track of what we had been doing so well,” he said. “Offensively, we were generating good offense but started to get to eager and lost patience. On top of that, Agoura had some great plays defensively, as well, and the goalie had some big stops.”