No. 3 Chaminade Girls Stifle No. 1 Redondo in Upset 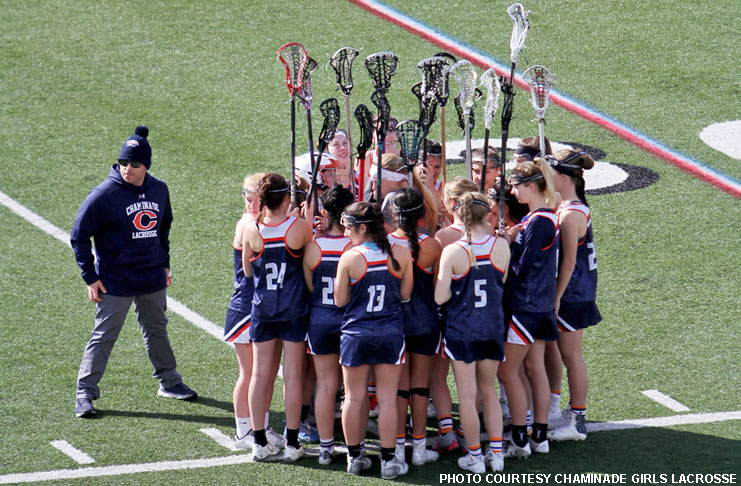 Senior goalie Rachel Goodside recorded 14 saves for third-ranked Chaminade on Wednesday, backstopping a defense that stifled high-scoring and No. 1-ranked Redondo Union in a 7-3 Eagles’ victory.

The Sea Hawks scored first, but Chaminade limited them to only that goal in taking a 3-1 lead at halftime, and Redondo never managed to tie or lead again.

“We have never beaten Redondo before,” Chaminade coach Scott Cohen said via text after the game, “and to do it at their place was really special for the girls.”

Last spring’s 9-7 defeat in the semifinals of the US Lacrosse Southern Section championship tournament was the Eagles’ fourth loss to Redondo in the last four years and fifth overall since Chaminade began playing girls lacrosse in 2009.

Junior Cate Mackel and senior Chiara Adendorff each scored three goals and had two assists for Chaminade, but Cohen said this one was all about Goodside and the defense. “The defense has been ridiculous,” he said via text.

Redondo fired 17 shots at Goodside on Wednesday, but only three found the net, an astounding .823 save percentage.

Saturday, the Eagles allowed only eight goals in three games at the Birmingham Lax Bash, winning the Gold Bracket for the fifth year in a row. And since an 8-5 opening-game loss to No. 6 Royal, the Eagles haven’t allowed any opponent to score more than six goals in a game.

Chaminade plays at Louisville on Thursday, then is home Saturday against 2015 section champion Foothill. Redondo Union plays at El Segundo on Friday.