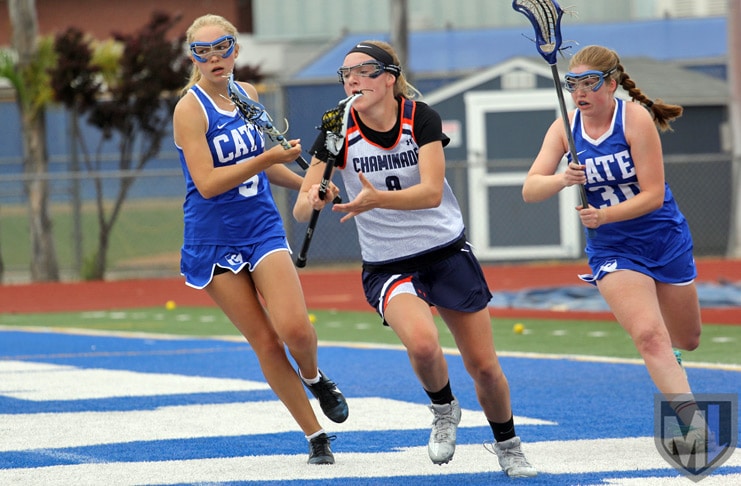 The top-seeded Chaminade girls broke open a tie game with four goals in the last 10 minutes of the first half Saturday and went on to beat No. 4 Cate 9-6 to advance to the US Lacrosse Southern Section North title game for the first time.

“This is our third year in a row in this game, and we haven’t advanced,” Eagles coach Scott Cohen said, “so we’re super excited for the opportunity.”

Last year, the Eagles lost to Redondo in the semifinals, and in 2015 they lost to Oak Park at the same stage of the tournament.

After a fast start Saturday — Chaminade led 2-0 in the first three minutes — Cate’s aggressive defense and relentless pace had the Eagles on their heels. Cate battled back to tie 2-2 with 18:44 to play in the half and again 3-3 at the 10-minute mark.

“We weren’t playing Chaminade lacrosse in the first half,” Cohen said. “Once we figured out what they were going to do on us, we settled our nerves and went forward.”

Two Cate penalties midway through the first half appeared to make the Rams’ defenders back off a bit and play with more caution. Chaminade took advantage and burst out to a 7-3 halftime lead.

Coming out of halftime, the Eagles extended their lead to 8-3, and that score held until the clock ticked inside of 10 minutes and the Rams ramped up their pressure defense once again, double-teaming the ball and trying to force turnovers. It very nearly worked.

Cate capitalized on a Chaminade turnover at midfield, converting on the fast break to pull within 8-4 with 8:47 to play. The Rams scored two more, with 4:44 and 1:51 to play, pulling within two at 8-6 and making Chaminade very nervous. The Eagles managed to hold on and run out the clock, though, with Mackel tossing in a goal at the horn for the final margin.

“I can’t give that team enough credit,” Cohen said of Cate. “That’s a good lacrosse team. They were undefeated, and they had unbelievable athletes all over the field, and the game could have could have gone either way.”