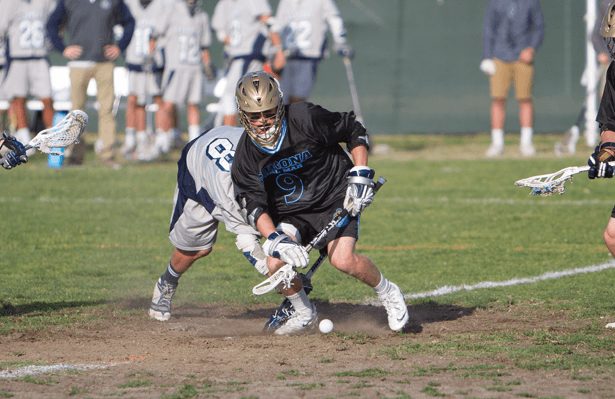 CDM faceoff specialist and rising junior Jason Simaan has muscled his way into the Ivy League.  He verbally committed to attend and play lacrosse at Brown University. All of Orange County was watching when Simaan’s faceoff skills helped bring the CDM Sea Kings to semifinals last season.  Virtually unknown until he started to garner attention on the national recruiting scene last summer, Simaan busted out during the 2014 high school season.  His ability to get his teammates repeated possessions with his signature clamp down was a key component to the Sea Kings’ success in 2014.  Simaan’s performance earned him First Team All County honors and a spot on the Under Armour West team that is more than holding their own against teams from Baltimore, Long Island, and upstate New York this weekend.  Simaan is now committed to take his prowess to Brown University, once he graduates in 2016.  CDM Head Coach G.W. Mix had this to say of the First Team All-County Faceoff Specialist honor:

“Jason is a very bright and talented student-athlete.  He is dedicated to his craft and has worked extremely hard to put himself in a position to have been recruited by a number of quality schools.  In the end, he chose Brown and we are all very proud of him.  His teammates and I are confident he will represent our program well and have a great career in the Ivy League.”

When asked why he chose Brown, Simaan says, “The coaches are fantastic, they’re all great. They really made my decision easy. I love the campus. Brown has an open curriculum, where you can choose your classes.”

Brown admits students of the highest grade point average, with SAT and ACT scores to match.  To earn his way, Simaan says, “I put in a lot of hard work in class, not only on the field.”  When he gets there, Simaan hopes to earn some playing time as a freshman, “to help win more games.”

Names like Ryan Harnisch, Austin Babb, and Michael Marino, lords of the OC faceoff hotbed, are all familiar to Simaan. “They’re all great guys,” he says, “They’re really good. They’re great competition and practice.  We’re all friends and we all hang out.  I see them at tournaments too.”  The OC scene is proud to have helped Simaan with his acheivments.

“I’d like to shout out to my parents and Coach G.W Mix,” says Simaan, “I’d like to thank them all for helping me get this opportunity.”

Congratulations, Jason Simaan! Stay tuned in for more updates of Simaan’s summer lacrosse activity, including the Under Armour All-American Underclassmen Tournament this weekend.