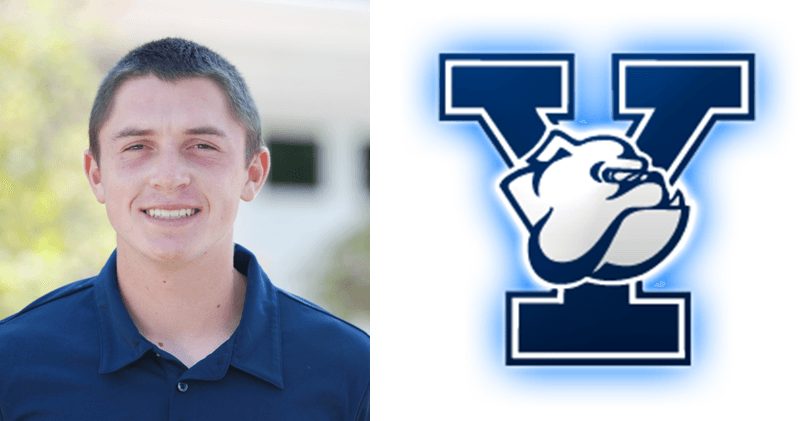 “The news was good and the long wait was worth it,” said proud papa Frank Crance of goalie Hoyt Crance‘s verbal commitment to Yale University.

Hoyt Crance is set to take that wide stance, those cat-like reflexes, and his X-ray clearing vision to the Ivy League.  It’s a good fit for the First Team All County honoree, who had 116 saves, 57 goals against, 6.82 saves per game, a 67.05 saving percentage, and minuscule 3.35 goals allowed average for the spring 2014 season.

Not only did Crance make All County First team.  He’s also recipient of the Gratzinger Award and Scholarship and OC Register’s Athlete of the Week.  Apparently his shot stopping ability and his easy clears to twin teammate Hugh Crance caught (literally!) the attention of the entire Orange County lacrosse community.

College recruiters  were looking at Crance too, and Yale University is forrtunate to have laid claim on him.  Yale University Men’s Lacrosse is in the top 20 of Division I NCAA lacrosse and third in the Ivy League, according to NCAA.com.  Crance will be keeping for them once he graduates from CDM.  When Hoyt takes the field for Yale and brother Hugh for Notre Dame, it will be the first time two brothers from Orange County have played Division 1 lacrosse.

Both Hoyt and Hugh got their first taste of Yale Lacrosse at the Yale Bulldog 120 prospect event.  That was last June.  One year later, after constant communication between the Crance family, Coach Mix, and Coach Shay at Yale, Crance now knows where he’ll be headed after graduation.  Yale should be quite familiar to Crance by now.  He’s already gotten to know the coaches, attended a team practice, spent time with players, and was even there for Yale’s home opening 10-6 domination against St. Johns last season.

Crance is a multi-dimensional athlete, having swam, and played soccer and football in addition to lacrosse.  When he goes to Yale, he has a CA State DIII football Championship, All League First Team, and Linebacker of the Year awards to brag about, too.  Bragging rights aside, Hoyt and his family humbly have several key figures to thank:

“None of Hoyt’s success and accomplishment in lacrosse would have been possible without the efforts, guidance, instruction and encouragement of Coach Mix (himself a former goalie at UPenn before his coaching days).  He will be reluctant to take too much credit, but Yale (and Notre Dame for Hugh) just wouldn’t have happened without him.  We as a family feel so lucky to have ended up in his orbit and to now be able to count his whole family as friends.

Coach Mix has always surrounded himself and staffed his programs with assistants of the highest caliber, and all deserve major props. In particular, Andy Chalupa for teaching the boys the game (the right way) at a young age, and, in Hoyt’s case, Tim Cassi (CdM goalie coach, who was at Colorado for the World Lacrosse games as France’s goalie coach) for the countless hours of instruction and advice (not to mention encouragement) to Hoyt in high school and throughout the recruiting process.  Devin Arkison, Jeremy Sieverts and Noah Molnar also contributed in their own ways.

Current Yale middie Michael Keasey (CdM 2012 grad and Hoyt and Hugh’s teammate at CdM their Freshman year) opened the door at Yale for CdM lacrosse athletes and deserves no small amount of recognition. He and his family provided tons of encouragement and support throughout the entire process.  Both Hoyt and Hugh’s commits are really a credit and testimony to the entire extended “CdM Lacrosse Family” that Coach Mix has established.”