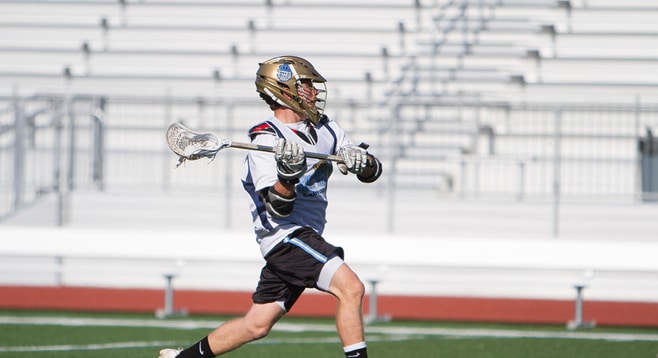 Two heavyweights squared off in San Clemente Friday night in a battle of Top 5 ranked unbeatens, and when the dust cleared Corona del Mar proved worthy of their higher ranking with a hard-fought, 4-3 win at San Clemente’s second home field, Vista Hermosa Sports Park. The Sea Kings improved to 4-0 while San Clemente fell to 5-1.

The Sea Kings raced to an early 2-0 lead on goals by Jordan Greenhall and Jay Damon, but SC’s Austin Streeter answered to cut the lead to 2-1. CdM’s standout face-off midfielder Jason Simaan then began exerting his dominance at the face-off X, winning four straight to help CdM notch the next two goals and establish a 4-1 halftime lead. Sherwin Gersten and Noah Howe were the Sea Kings goal scorers–all four CdM goals being unassisted.

But San Clemente stormed out in the second half, dominating possession and shots, getting nine off while CdM goalie Hoyt Crance lived up to his hype with four excellent saves. One SC shot did escape him, as SC junior attack man Jack Renard ripped a shot past Crance to cut the CdM lead to two with 3:28 left in the third.

SC then pressed heavily in the fourth quarter, but Crance was again up to the task, denying the Triton’s on numerous occasions, including two point blank shots by senior Peyton Garrett. But SC kept pressing and scored with just over four minutes to play as senior Austin Lickley snuck back door off a nice feed from Collin Zines to cut the score to 4-3 and get the large home crowd fired up.

Facing heavy pressure, Crance and the CdM defense simply refused to crumble, as Brett Greenlee and Hugh Crance stepped up to help seal the win by forcing a final turnover in the game’s final seconds as SC looked to tie with just 20 seconds left.

STARS OF THE GAME

2. Jason Simaan, Corona del Mar, midfield: His four first half face off wins and eight of 10 for the game gave the Sea Kings priceless possession to stifle the high-powered San Clemente offense.

3. Austin Boyer, San Clemente, goalie: Battling a nagging injury, the sophomore goalie was huge for SC as they mounted their comeback, notching five of his eight saves in the second half, including a fantastic goal-mouth save on Sherwin Gersten late in the game.

HONORABLE MENTIONS: SC’s Austin Lickley had 1 goal and 1 assist and played his best game of the season; CdM’s Hugh Crance and Brett Greenlee matchup up against SC’s offensive threats and made life miserable for the Tritons offense.