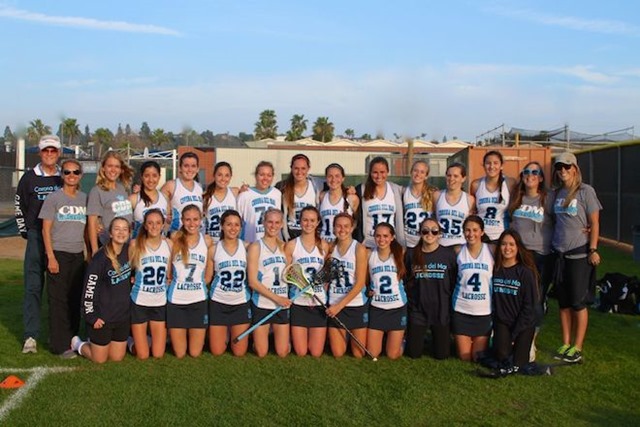 In terms of the rankings, the result of Wednesday’s Pacific Coast League girls’ lacrosse match had to be considered an upset. Beckman came into the match ranked No. 4 in Southern California by laxpower.com, and CdM was No. 10. The Patriots, who own impressive wins over Los Alamitos and Mater Dei, were also the top-ranked team in Orange
County. CdM was again at the No. 10 spot.

The team that always seems to have the “LAX power” in the league is Beckman. But CdM might just be ready to change that this year. Senior attacker Kacie Kline scored six goals as the Sea Kings posted a dominating 15-11 upset victory at home, and it wasn’t even as close as the score suggested. The Sea Kings were ecstatic after the game, taking a team picture in front of the scorer’s table. It wasn’t hard to understand why. Corona del Mar, which finished tied for second in league last year with Woodbridge, takes over first place all alone. It’s a spot in which the Sea Kings have never been when the season was over. Beckman and CdM shared the league title two years ago, but the
Sea Kings have never won the outright crown.

Now CdM (6-3, 4-0 in league) is nearly halfway to accomplishing just that. “Our team goal this year is to win league, so this is huge,” CdM Coach Aly Simons said. “It’s one step toward that goal. We beat Woodbridge last week, and today we beat Beckman. Our goal is becoming hopefully a reality … We’ve really stepped up our practices, and I think we had some strategy that helped us today. The girls were mentally prepared.  “According to the rankings, yes, for sure [it’s an upset]. [But] I feel like we can compete with all of these teams. I feel like our rankings don’t do us justice.”

The Sea Kings jumped on Beckman (6-1, 3-1) early in the first half. They scored the first three goals of the contest, all by Kline, with assists going to fellow senior captain Sabrina “Bean” Smith and freshman Kennedy Mulvaney. Beckman responded with two goals from senior Savannah Krause, both coming as Smith sat out after being issued a yellow card. But the Sea Kings, undeterred, ripped off six straight goals. By the time Mulvaney earned her second assist, finding sophomore Payton Carter in front of the goal, the Patriots were down 9-2 with 5:42 left in the half. The Sea Kings ran their lead to as many as nine goals, at 14-5, when Kline scored with 10:40 left in the contest.

It was a team effort for sure for CdM. Sabrina Smith and Jamie Smith, another senior team captain, each scored three goals. Jamie Smith also played an important role defensively, as she stayed close with Beckman junior Shea O’Donnell for much of the game. O’Donnell, who came into the game leading Beckman with 35 goals this season, was held scoreless. “We wanted to just shut her out,” said CdM junior Emily Schwartz, who also delivered a standout defensive game. “We wanted to make sure that she
wouldn’t get the ball, ever … Jamie did a fantastic job. Honestly, she helped us win this game immensely.”The fourth and final senior captain, Kendall Mulvaney, had a goal and two assists for CdM.

And senior keeper Kate Allen played what her teammates called her best game of the season, making 11 saves. Five of Allen’s saves came off free shots from Beckman, and those are saves that really can be momentum-changers. “We’ve been preparing for this game for a long time,” Allen said. “On defense we were very communicative. We’re a team, we’re a family, so I think we just work really well.”

To avoid giving up at least a share of the league crown, Duchene and the Patriots will likely have to beat CdM at the Beckman field in the teams’ second league meeting April 28. “We started off a little slow as a team today,” Duchene said. “CdM played a good game. I think we just didn’t go out with the intensity that we should have from the beginning. We kind of fought with each other instead of [playing] together as a team.” That wasn’t a problem for the Sea Kings. Kline called this the closest team she’s been on during her four years on varsity. “It’s crazy, because we have five freshmen,” Kline said. “We have so many freshmen on the team and a lot of seniors, and not very many in between. I think that it’s great that we get along so well.”

Winning the outright league title would mean a lot to Kline and Sabrina Smith, the two four-year varsity players on the squad. There are still six league games to go, but the Sea Kings control their own destiny. “We’ve never [won league],” Kline said. “We’ve either not done it at all, or we’ve shared it with Beckman. This means so much … It gets all of us
so excited. It’s just one step closer to our goal for our team.”