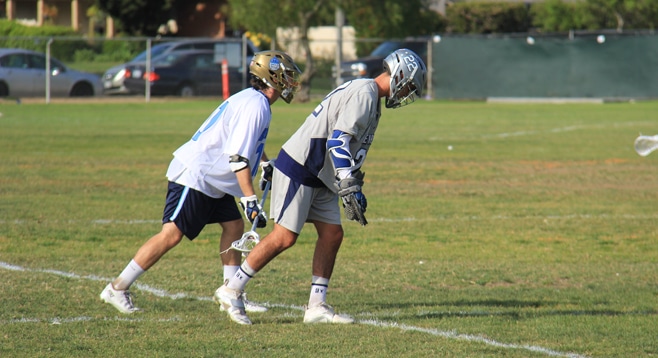 If the complete game put on by CdM Wednesday at Los Alamitos wasn’t evidence enough that the Sea Kings are one of the best teams in the county, they put on another clinic vs. Newport Harbor on Friday night.

Both Los Al and Newport are very solid teams. They are both well-coached and have plenty of talent. This year, however, it is evident that the Sea Kings are just operating at a different pace from their opponents so far.

The controlled type offense seen in this game was eerily similar to the display put on at Los Al except the Sea King’s shooters found the net a little bit earlier. Within the first four minutes of the game Stephen VonDerAhe and Sherwin Gersten (2G) had already found the back of the net. Three minutes later Ben Palitz would strike for his first of three (3G, 2A) and on the ensuing faceoff, Jason Simaan would take his own faceoff win and finish as no one stepped to him streaking down the middle of the Newport D.

The Sailors finally settled down and were able to play some offense in the second quarter but CdM defenseman Hugh Crance would continually have his way with whomever he was guarding finishing the day with six ground balls almost all caused by his own take-away checks. John Mooers was the lone Sailor scorer in the first half as CdM rolled into halftime up 9-1.

The second half was slightly less productive for the CdM offense but they kept up the defensive intensity with help from goalie Hoyt Crance. Still, the Sea Kings were able to produce four more goals thanks to individual efforts by Noah Howe, Jay Damon, Nino Chavez, and Nick Yi. Alex Fuller refused to quit and worked hard for Newport’s only goal in the third. In the closing minutes Kole Escher and Chas Beek refused to quit and subtracted two from CdM’s lead to bring the final to 13-4.

Stars of the Game:
1. Ben Palitz, CdM, attack: Three and two on the day, Palitz is starting to emerge as one of CdM’s best offensive threats. Look for him to start commanding more defensive attention.

2. Eli Gutierrez, Newport Harbor, goalie: The Newport goalie fought to the end and tallied 12 saves on the night. If he hadn’t been as on in the second half the score would be much more lopsided.

3. Hugh Crance, CdM, defense: Hugh Created almost all of his six ground balls with takeaway checks and even had a chance or two to score. Unfortunately none of the shots he had went in.