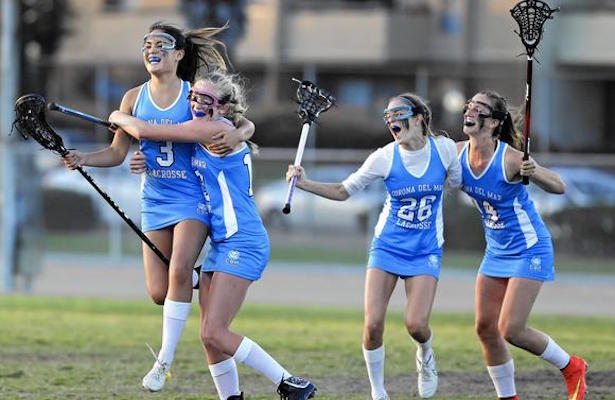 No. 10 Corona del Mar defeated No. 13 Newport Harbor 11-4 in the annual renewal of the Battle of the Bay on Saturday. CdM’s draw control (9 of 10 in the first half, 14 of 17 overall), team defense, and a four goal flurry in the closing minutes of the first half were the key factors in the win.

The game started well for the Sailors.  Goals by freshman Adena Rothbard, sophomore Sarah Farley (first varsity goal) and senior Jordan Blanchfield gave Newport Harbor a 3-2 lead with less than four minutes left in the first half. It was at that point that CdM’s draw control and defense took over the game, and the Sea Kings pulled away.

Just 30 seconds after Blanchfield’s goal, sophomore Kennedy Mulvaney and junior Paige Nelson answered with goals only nine seconds apart.  Another Nelson goal, this time with an assist from Hailey Neumann, made it 5-3.  And then sophomore Jensen Coop scored one of the most dramatic goals of the season. Coop, posting up on the crease, collected a laser pass from classmate Katie McCabe and scored with one second left in the half to make it 6-3 at the intermission.

McCabe, Nelson and Caroline Bethel kept it going for CdM in the second half, and the Sea Kings’ lead grew to 9-3.  Senior captain Daniela Vazquez ended the Sailors’ scoring drought at 10:59 to close the gap to five, but the Sailors were unable to penetrate the CdM defense again after that.  Jensen scored twice more, once with an assist from Mulvaney and once from a free post to reach the final score of 11-4.

Coop earned a game ball for her four goals and 14 draws.  Nelson (3g, 1a),  McCabe (2g, 2a), Mulvaney (1g, 1a),  Bethel (1g), and Neumann (1a)  completed the CdM scoring goal. Mulvaney complemented her offensive output with a  team-best five ground balls, two interceptions and two caused turnovers.   Freshman goalie Ashley Olson had one of her best games of the season and finished with 10 saves.

Next up: Newport Harbor (7-5) travels to Esperanza (4-9) on Tuesday in a key Century SE League game.  CdM (7-5) returns to Pacific Coast League play when they travel to Woodbridge (11-1) on Tuesday.