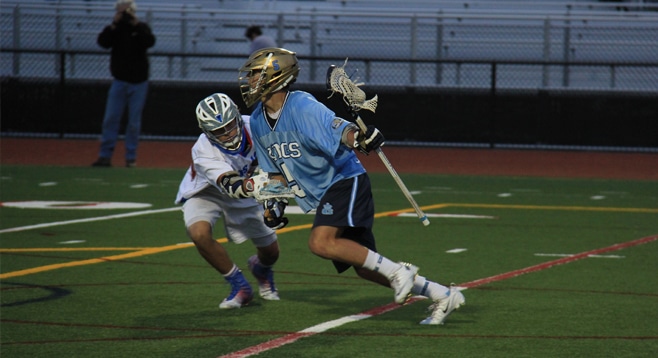 The CdM Sea Kings have one of the best defenses in the county, but it was their offense that would control Los Alamitos and time of possession in a convincing 12-2 win.

“Sometimes the best defense is a good offense”; the phrase was ultra applicable on Wednesday night in Los Alamitos as CdM showed off its maturity working for quality takes and cashing in on Los Al’s mistakes. The time of possession was off the charts for the Sea Kings at about 75% to 25%. CdM was patient and disciplined from the opening whistle.

Sherwin Gersten and Noah Howe were the only two Sea Kings to score for the first 10 minutes of the game thanks to Jackson Browner‘s four first quarter saves. Tyler Miller took advantage of a wide open Andy Barnett on the crease between CdM’s first two goals. Ben Palitz would end the first with an inside finish. By the way Los Al was making saves and playing good body defense it appeared to look like it would be a close, low scoring game.

Three penalties and Jason Simaan killed the Griffins of Los Al in the second quarter when CdM was not able to cash in on man-up opportunities but did use the full time to wear Los Al down and quickly get the ball back on offense after their three additional goals (Howe, Gersten, and Nino Chavez) with face off wins. Simaan only lost two face offs all game going 12/14 on the day. Los Al was still competitive throughout the second as Brandon Ezell was able to score and the Griffin’s offense generated enough shots for Hoyt Crance to make four of his five saves on the night.

Thanks to a 6-2 lead at the start of the third, the Sea King’s defensemen were able to start putting pressure on the ride. Brett Greenlee and Hoyt Crance caused a number of forced turnovers and failed clears in the third that turned into more offense for CdM. They would double up by winning a vast majority of 50/50 ground balls after Los Al’s defensive takeaways and create even more opportunities to strike an already tired Griffin defense. Contrary to what the score would indicate, Los Al sat down and played very good defense for extended periods of time in the third and some of the fourth quarter but simply could not get the ball back after forcing turnovers. Howe, Gersten, Chavez and Palitz combined for 15 ground balls on the game (twice as many gb’s as the defense had) and all of the third quarter goals.

The fourth quarter was much of the same patient offense that ended up adding two more goals by Jay Damon and Cole Campbell. CdM was simply deeper and owned the pace of the game both offensively and defensively and it showed beating Los Al by a final of 12-2.

1. Noah Howe, CdM: Noah continues his hot start this season with four goals in this game. His five ground balls were a major factor in the score differential.

2. Ben Palitz, CdM: On top of his four points (2G, 2A) Ben also had five ground balls. Each offensive gb was fought hard for and as stated earlier, a huge factor in the outcome of the game.

3. Los Al’s Man Down Defense: CdM was 0/6 on the night in EMO opportunities. The entire Griffins man down unit killed each penalty that almost all went the full time.