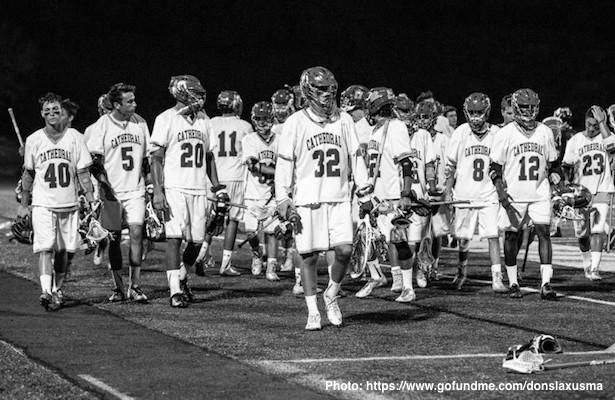 In what was sure to be an exciting Saturday night matchup, Cathedral Catholic visited the island determined to leave with a victory. The back and forth competition ended with Cathedral on top 16-10 at the final whistle.

With a dominant performance by junior midfielder, Jack Pharies at the faceoff X, Cathedral Catholic was able to possess the ball and dictate the tempo of the game. Quick ball movement led to impressive time and room shooting for Cathedral’s sharpshooters. Senior captain, Ryan Fazio and junior attackman Marcus Yandall led the team in scoring along with help from freshman attackman Logan Schmitt.

Cathedral jumped out to an early 4-2 lead by the end of the first quarter. They continued early in the second quarter adding another four unanswered, giving them an 8-2 lead midway through the second. With saves and clears from Islander goalie Easton Gormican, Coronado fought back with a few unanswered goals of their own. Attackmen Anthony and Nicholas DeMaio each tallied a goal along with junior midfielder Micah Ricard to put the Islanders back within three. A turnover late in the first half gave Cathedral a chance to get one back before halftime and again, freshman attackman Logan Schmitt was able to capitalize. Cathedral led the Islanders 9-5 going into halftime.

Senior midfielder Jake Heil scored early in the third to extend Cathedral’s lead by one. Back and forth it went with goals from each team’s top scorers throughout the third. Cathedral went into the fourth quarter leading 13-8.

A five-goal margin going into the fourth quarter was one the Islanders were confident to overcome but their inability to maintain possession of the ball made that comeback difficult. With a number of uncharacteristic offside penalties for Coronado, Cathedral spent much of the fourth quarter with possession, scoring three times early. Their 16th and final goal of the game came off a devastating intercepted clear pass and immediate long-range open net goal by Fazio.

With strong starts to each quarter, Cathedral forced Coronado to play from behind the entire game. Although the Islanders continued fighting back, time was not on their side. They scored a couple goals late from Jake Brophy and Ricard but it was too little too late. A solid performance in the cage from senior goaltender Will Howard and impressive faceoff play from Pharies were key factors in Cathedral’s win.