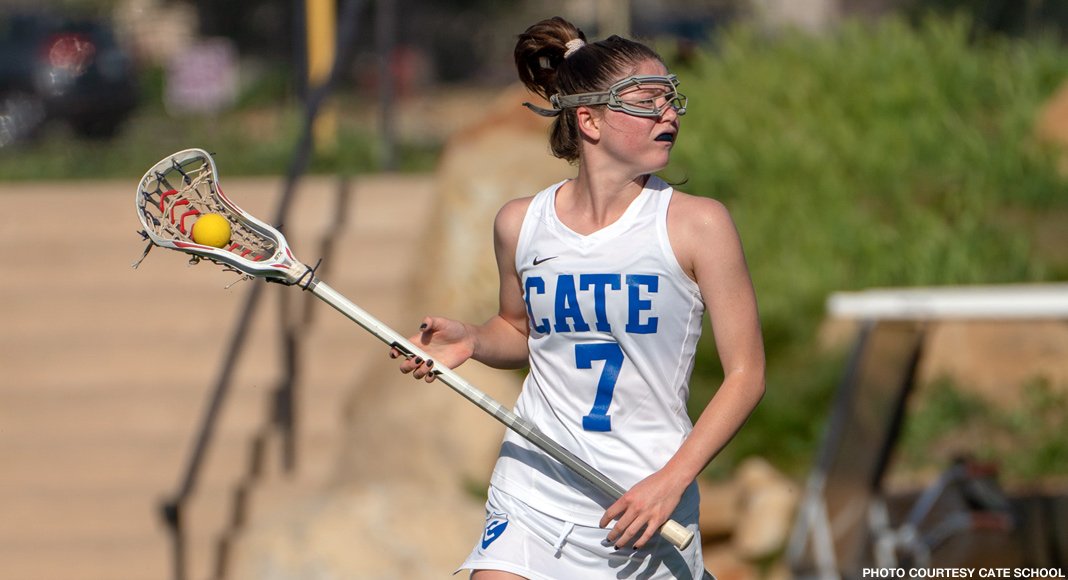 In August of 2016, Cate student Maddie Erickson (’19) and her teammate Brie Walker (’18) started an after-school lacrosse program for local girls in Carpinteria. What started as a group of seven third, fourth and fifth graders has grown rapidly.

Three years later, the Carpinteria Flames have more than 100 girls in grades 2-8 from Aliso Elementary, Canalino Elementary, Girls Inc. and Carpinteria Middle School, with each age group playing a full Fall/Winter season with practices and scrimmages in Carpinteria.

Last summer, Erickson won a grant provided by the Mark Metherell ’87 Memorial Service Challenge, named in honor of a Cate alum who died in 2008 while training and supporting Iraqi special forces. The grants give Cate students the opportunity to underwrite a service project, and Erickson used her Metherell to expand the Flames’ program.

In her Cate career, she has helped the Rams reach the LA Championship semifinals twice and tonight leads her team into the LA Invitational title game against Channel League rival Dos Pueblos (at San Marcos HS, 6 p.m.).

Erickson answered questions for MaxLax via email about the Carpinteria Flames program and the legacy she and her Cate teammates are leaving in the community:

What inspired/motivated you to take on something like this?
“There wasn’t something super specific that inspired me to do this, however as soon as we started going to Canalino Elementary that first year (August, 2016), I knew that I wanted to turn it in to something bigger and more stable for those girls. I created close connections with the young players, and I saw how much they looked forward to it as part of their weekly routine.”

How much time/effort/etc. does it take for you to be a student, an athlete and a coach/program leader?
“Like any student at Cate, it can be difficult managing school, sports and service, but I always really enjoyed and looked forward to going into town and hearing about the girls’ weeks. At times it was a lot to juggle, especially in my junior spring and senior fall, but lacrosse is something I am really passionate about, which made it a lot easier to manage.”

What do you see as the future for the Flames after you graduate?
“I definitely want to see the program continue, and I am confident that it will with the younger student-coaches (current 10th and 11th graders). A lot of the work I have done with the Metherell Grant (awarded to Cate student annually for a service project) has been put in to making the program as sustainable as possible and easier for people to continue. I want this program to stick around at Cate and Carpinteria for as long as possible.”