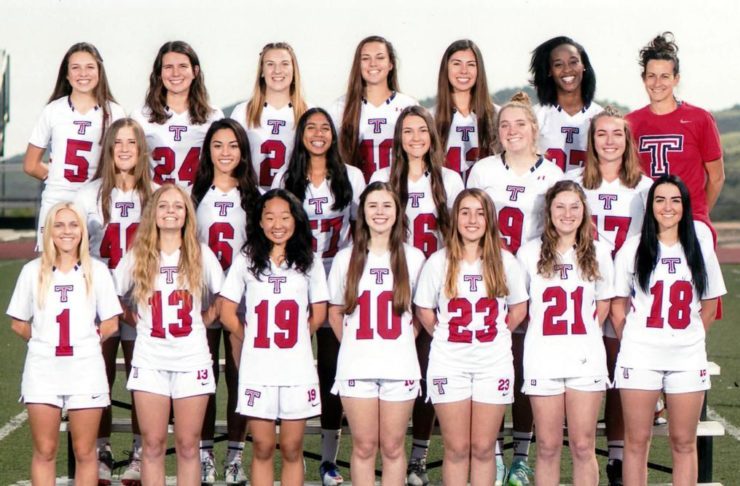 Rancho Santa Margarita – The Tesoro girls lacrosse team are no strangers to one-goal games. Prior to Monday, they had been involved in four of them, going 1-3. Down 8-7 with 91 seconds left in Monday’s game, the Titans were facing the prospect of another one-goal loss.

With the playoffs one week away Tesoro needed to find a way to pull this one out. The Titans turned to Alexa Catanzariti. Catanzariti responded by nailing two free position shots in the final minute and a half.

Behind Catanzariti’s team-high four goals, the Titans managed to beat Newport Harbor 9-8 on Monday at Tesoro High School. The Titans extended their winning streak to four games and also improved to 2-3 in games decided by one goal.

“I think it was just coming together as a team. They wanted it, they had each other’s back and they had that fight,” Tesoro coach Lauren Ciccomascolo said.

The game was tight most of the way as neither team led by as many as two goals. With Newport Harbor leading 4-2 in the first half, the Titans scored three straight goals to take a 5-4 lead at halftime. Tesoro goalie Leah Olson made two big free position saves to keep her teammates in the lead.

“She just keeps us in the game. If we’re having a bad game, we can count on her to make the saves and just keep us in there,” Catanzariti said about Olson, who had five saves.

After Tesoro struck early in the second half, Newport Harbor responded with three consecutive goals of their own to take a 7-6  at the 14:10 mark. After that, the Sailors and the Titans traded blows with Emma Roberson tying the game at 7-7 and Laura Tran giving the Sailors an 8-7 lead at the 6:52 mark.

The Sailors tried to run down the clock and play keep away after Tran’s goal, but the Sailors turned the ball over with a minute and 31 seconds left.

“We were looking to draw their defense out of the eight meter. We figured if we spread the field and started using the space they would be compelled to chase out after us. Didn’t quite execute it though,” Newport Harbor coach Matt Armstrong said.

“I think anytime you have a loss like this especially at this time of the season it can be a nice wake-up call, but there are still things that can be done. Even though it’s late in the season, we can still learn, we can still grow. I’ve seen this group of girls bounce back from tough games and come back really strong,” Armstrong said.

For Newport Harbor (10-5), Tran led the Sailors with five goals while Katie Hendrix had two goals and Sarah Farley had one goal. Goalie Jade Rettig had four saves for the Sailors.