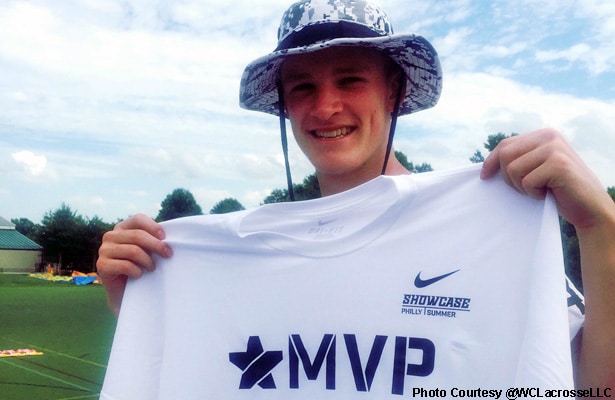 Carson Kuhl, soon to be a freshman at Westlake, traveled to Philadelphia last week to play with Team West Coast 2020 in the NXT Summer Invitational. Little did he know that he also would get a spot in the Philly Summer Showcase, a one-day individual recruiting event, on the eve of the tournament.

Kuhl turned that surprise opportunity into an MVP performance. Here’s how Matt Chandik, Communications Coordinator for NXT, described it on the NXT blog:

As of 24 hours before he took the field at United Sports for the Philly Summer Showcase, Carson Kuhl didn’t even know about the first-year event.

The 2020 midfielder from Westlake (Calif.) came to Philly to play with his West Coast Lacrosse team in the weekend’s Philly Summer Invitational, but he wasn’t aware of Friday’s individual showcase until right before the event. He was so late to the party that he wasn’t included in the original rosters and had to be added to them via an addendum.

“I was the last one registered,” the Cali speedster said. “I’m blessed for my coaches getting me in.”

“This was my first showcase,” Kuhl said. “Being the MVP is definitely not what I expected. I’d never been out to the East Coast – first time – and it’s just a great experience with all of the college coaches on the sidelines and all of the talent out here. I’m just blessed to be out here playing with these guys.”

TWC 2020 went into the NXT Summer Invitational team event Saturday on a roll, having won seven tournaments in a row over the last 18 months.

But this trip provided a wake-up call. TWC lost 16-3 to Legacy and 12-1 to Rising Sons in Saturday morning pool play before finally recording an 11-7 win over Top Left to finish pool at 1-2. TWC then beat Bellevue 9-7 on Sunday to finish 2-2 for the event.