From Carsick to Just Sick – Sailors Take Down Undefeated Chaminade 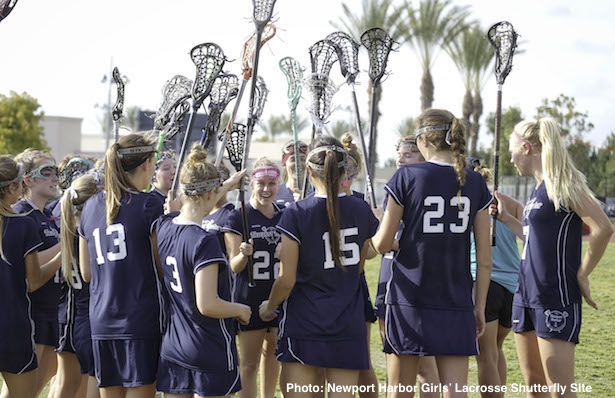 After a ride that clocked in at two hours, forty-five minutes, the Newport Harbor girls’ lacrosse team emerged from the bus stiff and a bit green from the winding path of Topanga Canyon Road.  The players pushed themselves through a truncated warm-up, and spent the early part of the contest working to find their groove as Chaminade built a 3-0 lead by the mid-point of the first half.  A time-out settled everyone’s nerves and stomachs, and the Sailors played the Eagles to a stalemate over the next ten minutes, with junior midfielder Sarah Farley breaking the seal on the Chaminade cage off a pretty drive through three crashing defenders.  Ninety seconds later, Farley drove again, drew pressure, and fed a sneaking junior attacker in Caitlin Dwyer for the slam dunk that brought the score to within one goal at halftime.

The second half was all Newport as Dwyer tied the game on a crease roll at 24:19.  Five minutes later, Junior captain Katie Hendrix took charge, scoring on a blistering free position shot to give the Sailors their first lead of the evening.  The teams exchanged goals with junior attacker Heather Roberts putting one away to give the visitors a 5-4 lead.  Although Newport took a 6-4 lead and appeared poised to run away with the game, the hosting Eagles were not about to give up; they scored two to tie the game with six minutes to go, and the 6-6 game remained undecided until senior captain Rylie Siegfried made a slippery cut and accepted a feed from Roberts with 2:52 remaining.  Hendrix and Siegfried each added a goal to ice the victory, 9-6.

Up next: Newport Harbor travels to El Dorado on Tuesday evening to open up league play.