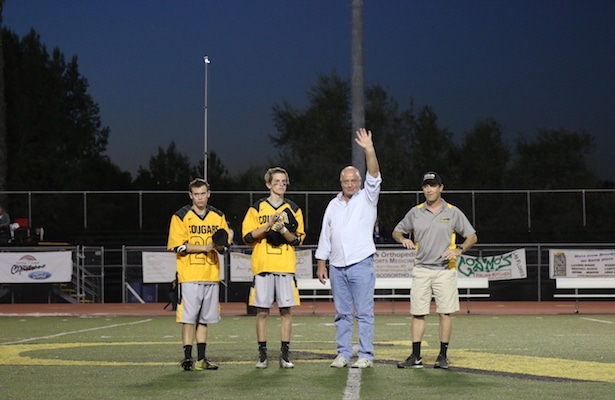 Here is what coach Gerbershagen had to say about the three time collegiate All American:

“Capo Valley Lacrosse is celebrating its 10 year anniversary this year, and tonight we would like to thank our first ever head lacrosse coach at Capo Valley. Please welcome back Scott Grubert. Scott is one of the founding fathers of lacrosse in the Orange County area and coached at Mission Viejo High School as well for the years 1993 & 1994.

Scott was Class of 1979 at Adelphi University where he was part of the lacrosse team that won the first NCAA Championship for Adelphi. He was a three time All-American from 1977-79, named the captain of the team during the 1979 season, and was honored as the U.S. Intercollegiate Lacrosse
Association’s Outstanding Defenseman in the Nation. Additionally, he was named the Adelphi MVP in 1978. As a testimony to his greatness on the field, his jersey, #20, was retired on April 20th, 1986 at a ceremony held at Stiles Field. He was also in the Hall of Fame Induction Class of 2000 for Men’s Lacrosse.

Scott is currently still very much a part of the lacrosse community. He and his son, JR, have established the Mission Viejo Ducks, a program that will develop young lacrosse players who will eventually feed into Capo Valley & Mission Viejo High School. Scott was inducted into the Southern California Lacrosse Hall of fame in 2006.

Please stand and put your hands together to welcome Scott to tonight’s game. We are proud to have him as part of the Capo & Mission family.”