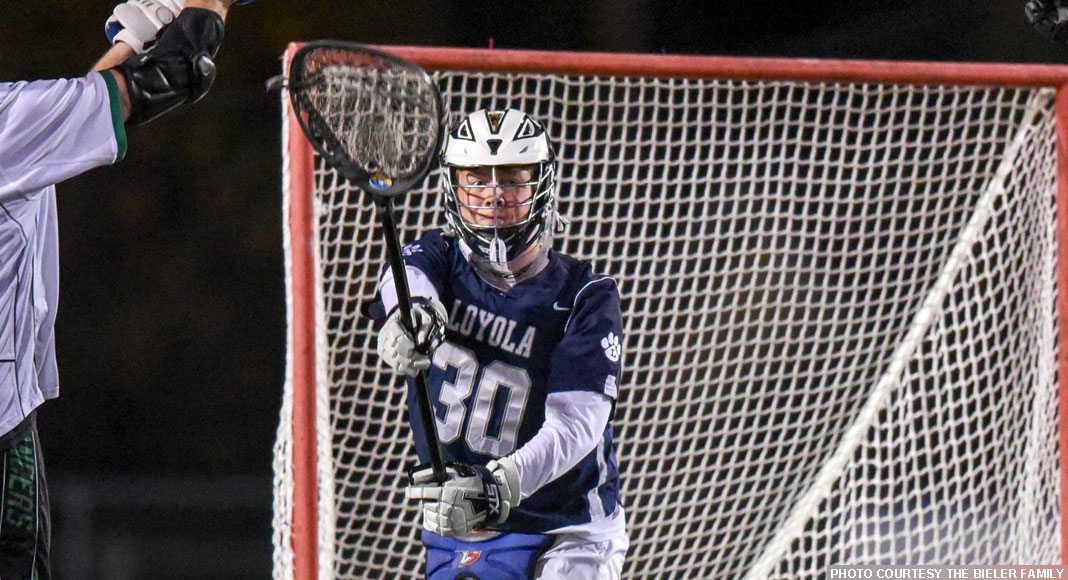 Senior goalie Cam Bieler of Loyola took control of his college future in the fall and earned an opportunity to play at NCAA D-I St. John’s University in New York.

“Before St. John’s, I had focused mostly on smaller liberal arts schools, such as Rhodes College, Centre College, and Ohio Wesleyan,” Cam Bieler said via email. “Going into the recruiting process, I knew I wanted a strong academic program that was also serious about lacrosse.”

Bieler said he didn’t really consider or reach out to Division I programs until late in his recruiting process. But he said his LA Heat coaches thought it would be a good idea to at least explore D-I opportunities.

“I had the opportunity to visit St. John’s before Thanksgiving, and I fell in love with campus and the location, despite it being freezing cold,” Bieler said. “As a city kid, having the school be in New York City was pretty awesome. I got to watch a practice, and my meeting with Coach Miller and his assistants went great. When I got the call from the coaches later in November, saying yes was very easy.”

Bieler, who has played behind All-American goalies Joe Theuer and Will Parducci in his high school career, credited his time with the LA Heat for providing him the opportunity to gain exposure and, ultimately, earn the opportunity to play at St. John’s.

“My high school experience did not have a large impact on my recruiting journey,” he wrote. “All of my contact and exposure to college coaches was through my club ball with LA Heat. My experience leading the Loyola JV team for two years gave me the chance to gain leadership skills. I have made many friends and have great teammates at Loyola, but high school play did not factor in my talks with college coaches.”

Bieler singled out his goalie coach as perhaps the biggest factor in his development.

“I have had so many people help me get to were I am today,” he said. “My biggest asset has definitely been my goalie coach, Mike McGovern. Meeting with him every Sunday for years has definitely shaped me both as a goalie and as a person. He is the best coach I have ever had and a great friend. My LA Heat coaches Jimmy Borell and Mario Waibel have been my coaches for so long and I have had a great relationship on and off the field with them.”

However, he said, the biggest impact on his journey has come from his parents.

“My mom is always loving and compassionate and made me believe I can do whatever I set my mind to,” he said. “And my dad has been my biggest motivator and supporter, always helping me focus on my goals and what I can achieve.

“I definitely have to shout out the men’s box league in El Segundo [that] my dad and I are a part of. Playing and hanging out at ‘The Dome’ with current and post-college players since I was in sixth grade has helped grow my understanding and love for the game.”