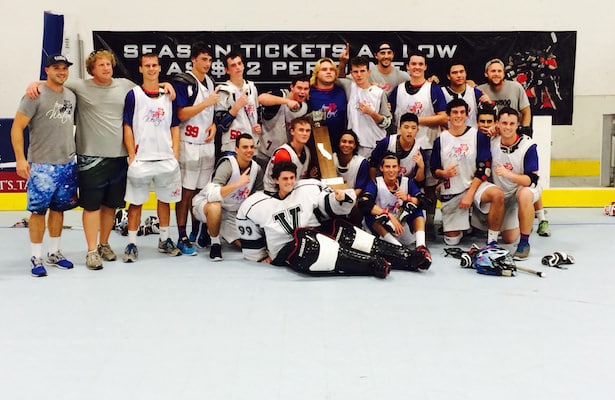 The 9th annual California Cup Box Lacrosse tournament takes place at the The Rinks in Huntington Beach October 31 and November 1. Owned and operated by the Anaheim Ducks, the Rinks are a state-of-the-art facility and perhaps the premier box lacrosse venue in Southern California.

Believe it or not the California Cup got started in 2007, which is practically pre-historic in local lacrosse terms.  Lacrosse had just been approved as a CIF sport and even college coaches were just beginning to wake up to how well  box skills translate to the field game.  Local participation in box lacrosse was sparse to say the least, yet the tournament organizers had the foresight to see what was coming.Tournament organizer <strong><a href=”http://www.westcoastlacrosse.com/page/show/767853-staff”>Steve Lane</a></strong> of West Coast Lacrosse is impressed with how the level of box lacrosse play continues to rise ” It started off modest with a few teams of passionate and dedicated teams, eager to learn. After the first few years’ things took off and we have seen constant growth in the level of talent each year since. With some of the new additions this year, it’s going to be even better. It’s starting to become evident which teams are spending time in the box rink outside of the tournament. Players are bringing high-level technique and IQ into the games now, and you can see guys starting to look comfortable inside the rink. We have also noticed a direct correlation between the teams which have been coming to the California Cup over the past few years and the success they are having in the field tournaments. It’s very similar to the trend of Canadian players standing out and having great deals of success in the NCAA over the past few years.”

The California Cup draws teams from throughout Southern California and is starting to see interest from out of state.  Lane says “There has been a mix of great teams winning the championships for their respective divisions. Our reigning champions are the Surf Dawgs, Team West Coast and Santa Monica Dragons from 2014. This year we expect a lot of new teams from all over California as well as teams from Nevada, Arizona and Oregon and we expect the tournament to sell out. We play Canadian Lacrosse Association rules. The tournament starts as pool play and the top two teams from each pool make it into a Championship game for the California Cup. ”

For more information go to <a href=”http://www.westcoastlacrosse.com/page/show/1376776-california-cup-box-tournament”>WestCoastLacrosse.com</a>.