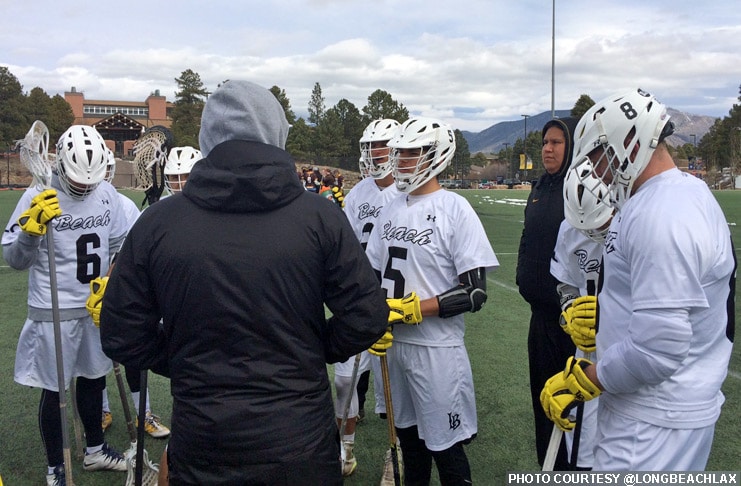 Head coach Chris Brignola is stepping away from the Cal State Long Beach sideline after three seasons, and the MCLA Division II club is in search of a new head coach. The Beach went 7-7 overall last year, including four consecutive nonconference wins to end the season. They finished 1-4 in the Southwestern Lacrosse Conference.

According to background information provided by the club, Brignola plans to stay connected to the team in a “general manager” type role, helping with finances, scheduling and other logistics. In three seasons, The Beach posted a 16-18 overall record under Brignola’s guidance, including 15-10 in the last two seasons. In the two seasons before he took over, Cal State Long Beach had gone 2-16 combined and then went 1-8 in his debut season.

The club would like to hire a coach by Aug. 28, the start of the fall semester, to take advantage of on-campus recruiting during the first two weeks of school. Last fall, the club said it added eight new players due to such efforts. For the coming school year, the club says it has been contacted by a number of incoming freshman interested in joining and expects to add 8-15 new players in September.

According to the club, The Beach returns 14 players from the 2017 roster. Two-time team captain Corey Schrimpl (Lincoln HS, Stockton) led The Beach with 39 goals and was second in points with 62, earning first-team All-SLC honors in the midfield. Sophomore attack Cameron Yerzyk (Chaminade) led The Beach in points with 67 (38 goals, 29 assists), earning second-team All-SLC honors. Also returning is face-off specialist Che Woolery (Los Alamitos), who won 61 percent of his draws and collected a team-high 96 ground balls as a freshman.

“A main focus point of Coach Brignola was maintaining a positive and respectful relationship with LB State Club Sports. Due to the positive relationship, they give us annual grants, field space two days a week (which we’re trying to increase), a private weight room three days a week and field space for games. Since our program is gaining more respect due to the increase in organization and talent, this season we were able to schedule games with teams the program has not played before, such as UCLA, San Jose State and Wyoming, and we’re in talks with other programs for future seasons.”

The club said its goals for next season include increasing its roster size from 20 student athletes to 25, adding a third practice day per week, playing a 15-game (or more) schedule and making the SLC D-II playoffs out of the Southern Division.

That last task became a bit less ambitious with the departure of 2017 National Champion Concordia to the SLC’s Division I ranks. Loyola Marymount replaces Concordia in the D-II SLC South.

For more information on the club and the open coaching position, contact Corey Schrimpl or Chris Brignola.