So Cal Express U13 National Team Reps the West at WSYL 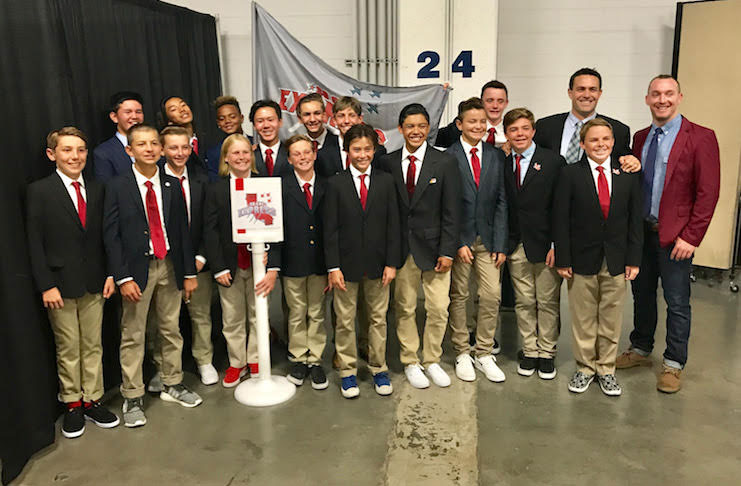 Press Release
Denver, CO, July 5, 2017 – After finishing first in a regional qualifier in Irvine in February, the SoCal Express U13 National Team — coached by Glen Miles, Adam Guy, Nick Tintle and Erik Krum — was awarded one of 24 spots in the World Series of Youth Lacrosse held July 1-5 in Denver. Coming into the event, the Inside Lacrosse World Rankings put the team in 2nd.

After checking in Saturday afternoon, the boys made their way to the broadcast booth for a live interview with Lax Talk Radio, where radio personalities called Express midfielder Jordan Pollard, a “young Myles Jones” and told listeners So Cal Express is a team to watch over the weekend.

At opening ceremonies, energy filled the room as WSYL founder Jake Steinfeld addressed participants, encouraging them to “never give up on your dream.” MLL star Rob Pannell announced that Warrior/New Balance was so committed to growing the game, each player would receive a pair of FreezeLX cleats.

In the first day of pool play, Express first met defending champions Legacy LC (Long Island). At the end of the first quarter, the teams had each swapped one goal, and at the half Express only trailed 2-3, but in the end in spite of Pollard’s 2 goals and 2 assists, Express couldn’t make up lost ground and fell 5-7.

Express kept things close with Tri-State (New Jersey) in the second game, but again, after being even going into Q3 and with a hat trick by Jackson Hines, Express still couldn’t eek out a “W.” For the third game, Express and Evolve Elite (Canada) were tied at halftime, but even with Zack Zahr winning 10 of 11 face-offs, Express lost in OT 5-6.

But while the scoreboard looked dreary on Day 1, the sun does always come out. Clouds parted on Day 2 for SoCal Express. In the first game, Express caught second-place Black Storm (New Jersey) by surprise by defeating them 8-6 with goals from Luke Lemus, Tyler Matthews, John Culley and Zahr. Sunday’s Game 2 vs. Warrior Lacrosse Elite (Michigan), Culley pulled in a hat trick in the first eight minutes of play, and Express remained dominant to the end.

Determined to make up for their slow start, Express entered Day 3 of competition confident and undaunted. Their opponent, Brotherly Love (Philadelphia), had a strong showing throughout the tourney, with their only loss to championship finalist Prime Time Lacrosse 5-7, but Express handily topped them 8-1. Goals were notched from Dante DeCollibus, Riley Chester, Lemus, (1), and Culley (4), and assists from Radyn Badraun, Makai Todd, Matthews and Culley.

While the Cali boys did not make it to the championship game, they proved capable of competing against east coast play that is often faster on offense and more aggressive on defense, usually pushing further out than west coast competitors.

Attackman Culley finished in the top 10 in average points per game, with 16 goals and 2 assists. Todd, the team’s assist leader with 5, tied for 19th overall in the tournament in assists, and face-off specialist Zahr ended the tournament with a face-off win percentage of 80 percent. Goalies Sebastien Chicas and Drew Tyson finished with a goals-allowed average of 2.83, both finishing in the top 20 goalies in the tournament.

Defender Connor Guerrero was selected to the All-World 2nd Team and was honored on the field during the championship game.

“I’m excited for our SoCal Express U13 World Series Team,” said Miles. “The boys represented So Cal with class and excellence. We got off to a slow start against terrific U.S. and international competition but finished strong. I’m very proud of our guys.”

After the championship game in Mile High Stadium, where Long Island Express defeated Prime Time, the boys were escorted by Coach Tintle (also a Denver Outlaws midfielder) to a private autograph session by the Outlaws. The team then watched the Outlaws take down the Atlanta Blaze, and then enjoyed a special 4th of July fireworks show. Without a doubt, it was a trip for the memory books.