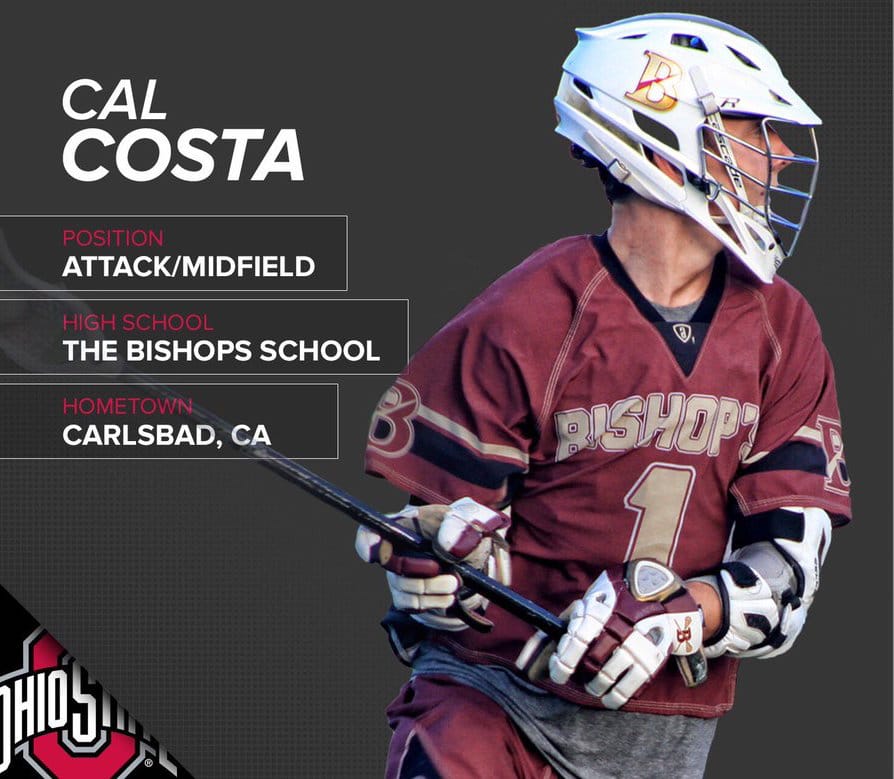 Cal Costa (the Bishop’s School) was one of 12 freshmen welcomed to the Ohio State Men’s Lacrosse team by head coach  Nick Myers.  Costa, who will wear no. 27 for the Buckeyes, is the only Californian in the Buckeyes’ freshman class.  He was a two-time MVP and All American at the Bishop’s School.

The class includes players from 10 states and provinces, with two from both Massachusetts and Pennsylvania and one from British Columbia, California, Florida, Maryland, New York, Ohio, Ontario and Virginia.

“We are adding a great group of men to the Buckeye family,” Myers, said. “As a whole, they address the needs we had following the graduation of last year’s seniors. They have developed through strong high school programs from a diverse group of states and provinces. All of the freshmen are outstanding athletically and are great students who are excited to be Buckeyes.”

Get to know the Buckeye freshmen this week. Cal Costa and Christian Feliziani kick off the series. #GoBucks pic.twitter.com/LmgprYVlfL

Costa’s bio from the Ohio State Men’s lacrosse website is presented below:

Personal: Son of Deborah and Anthony … father played baseball at Simpson College, uncle was a kicker at Missouri … enjoys fishing, golfing and surfing.

Costa on why he chose Ohio State:
“There are very few schools in the country that provide the uniqueness of a multifaceted education. Ohio State excels academically, athletically and everywhere in-between. However, Ohio State differentiates itself in the culture it breeds and through the attitude it demands. The coaches and lacrosse team exemplify these qualities. This is why I chose Ohio State.”