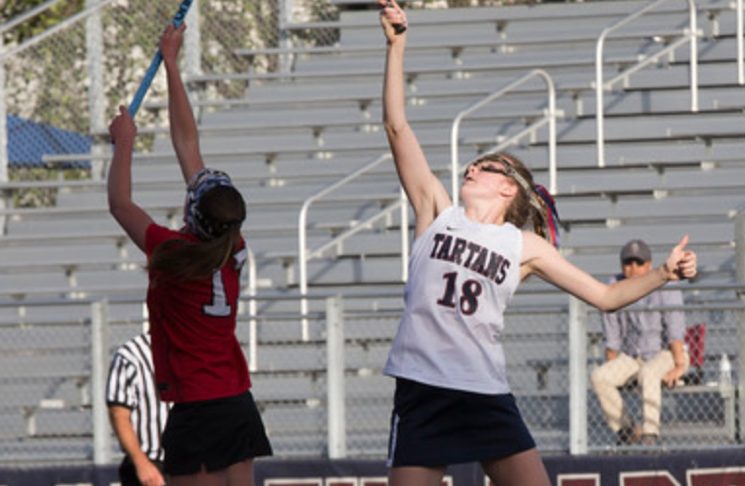 St. Margaret’s junior Cailin Young has verbally committed to play NCAA Division 1 lacrosse at San Diego State University. In 2016, Young led the Tartans in draws with 100 and co-led in caused turnovers with 20; was second in assists with 30; and third in ground balls with 27. She plays club lacrosse with XTeam, Victory Select and West Coast Starz.

As Young’s stats show she is a well rounded player who is willing to do the dirty work that is often the difference between winning and losing.  Her blue collar approach to the game is a source of inspiration to to her teammates. “I have been fortunate enough to play with Cailin for the past two years of high school lacrosse and she is one of the most deserving players of her commitment,” teammate Cameron Manor explained.  “Cailin is such a valuable player to have on a team.  She works harder than anyone I know and is someone that I can always count on on and off the field.  Everyone on the team looks up to Cailin and I can’t wait to see what she accomplishes in her future.”

“Cailin’s work ethic and dependability is definitely what sets her apart as a player,” Manor continued.  Whether we need help picking up 50-50 balls or winning the draw, she is always there to pick up where the team needs help.”

“I met Cailin five years ago and was immediately impressed by her drive and warrior mentality.  Young is a player who displays natural lacrosse talent and athleticism on the field; however, couple this with hard work and determination, and she is a force to be reckoned with.  Cailin has the uncanny ability to recognize a developing play.  She is proactive on offense capitalizing on opponents’ mistakes and on defense generating turnovers.  Cailin’s play is instinctive, and she is very selfless with the ball.”

“We are fortunate to have Cailin represent the Lady Tartans in 2017 and 2018, but we look forward to cheering her on at Aztec Lacrosse Field in 2019!”

Young told MaxLaxOC.com via email that she was attracted to the opportunity at San Diego State for many reasons. “The biggest was the environment and culture of the team the coaches have created,” she wrote. “It is something special that is unique and cannot be found anywhere else. Everyone who goes to SDSU has a sense of pride for the school and I wanted to be a part of that.”

With the verbal commitment behind her, Young is now focused on helping St. Margaret’s get to the next level. “These next two seasons, we are looking for a championship. This season we are going to be a lot stronger than we ever have been in the past. I am looking forward to helping my team be as successful as possible.”

Young also added “I’d like to thank my family for supporting me through the ups and downs of this process. Also I want to thank my high school coach Holly Reilly for making me the player I am today.”