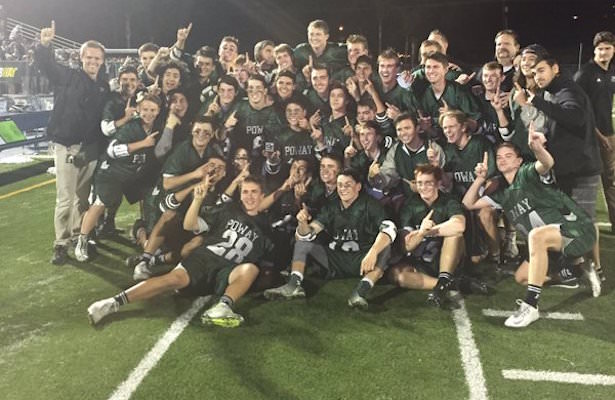 For the second straight year, the Poway Titans completed their championship run with a victory over the Torrey Pines Falcons in the San Diego CIF Open Division. In a well-played and physical matchup between the top two-rated teams in San Diego, a game which featured outstanding defensive efforts on both ends, it was the Titans once again taking home the hardware in 2016, defeating the Falcons 7-6.

Poway got off to a 3-0 start in the first quarter, with senior Brad Belasco (Westminster) scoring two goals and senior and 2015 CIF Player of the Year Jake Fiske (Bryant) adding one. The teams traded goals in the second quarter, with junior Matt Letteri alley-dodging for a score and senior

Zach Hodge (Cleveland State) sniping his first of two long-range strikes. The Falcons’ Spencer Small and Ara Suhadolnik would each find the net as well, and the half ended with the Titans in control with a 5-2 lead.

Congratulations to @PowayLacrosse on winning the @cifsds Open Division Championship for a 2nd straight year. pic.twitter.com/nQ5YfxMMOj

The Falcons started quickly in the second half. Suhadolnik added two more goals to complete a
hat trick, and senior Beau Botkiss (Harvard) added a third as Torrey Pines evened the score at 5. But Poway sophomore Kobe Brown came up big as he has done many times this season, putting the Titans ahead with a 15-yard strike. Senior Hodge added another deep rifle shot for Poway, and though Torrey Pines’ Aldrik Van Der Hyde brought the Falcons again to within one, Torrey would come no closer.

The game was really defined by great defensive performances. The strong Torrey Pines long pole defensemen were able to disrupt the balanced Poway offense somewhat, holding the Titan attackmen without a goal, and forcing the Poway midfielders to dodge and score to win.

But stronger still was the Poway defense. The game’s signature moment was in the final 47 seconds, when Torrey Pines had a two-man-up advantage, down by only one goal, and the Falcons were unable to score to tie the game. Titan defensive seniors Fiske, Bailey McLaughlin (Colorado Mesa) and Tony Chassen, along with sophomore Chase Crawford and junior Adam Voggenthaler gave the Titans the equivalent of a football fourth-quarter, goal-line stand to preserve the win. The game’s MVP was Titan sophomore goalie Kellan Cutting, who seemed to come up with one big save after another all game long, and sealed the game with a big save in the last 30 seconds. Head Coach Zack Burke’s Poway team has been defined by this type of performance all season long, going 5-0 in games decided by one goal and never losing a game in which they held the lead in the fourth quarter.

With the win, the Titans collected their school-record 18th win against only 3 losses, and completed their first-ever back-to-back boys lacrosse championship seasons, in what also can be described as Zack Burke’s Dynasty, given Poway’s dominance over the sport in San Diego the last two years. This is their third championship overall since CIF record-keeping began in 2002. The Titans are also the first repeat champions since the Open Division began in 2013, and the first in any division since Coronado in 2011-12. Torrey Pines finishes #2 in San Diego with a record of 19-3. Both teams will look to reload next season, each graduating 14 seniors, and promising an exciting 2017 CIF campaign for all.