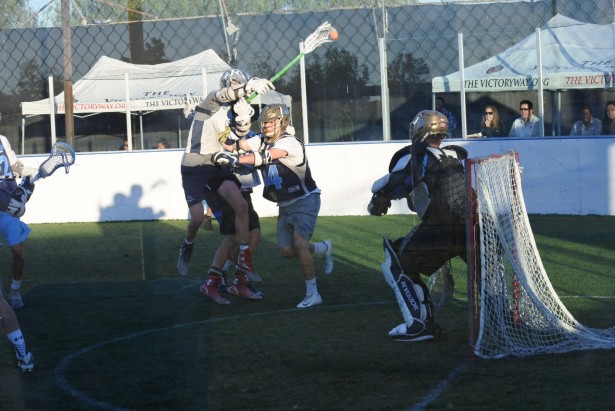 A quarter final playoff victory earlier in the day against Buku Red, earned Buku Blue a berth in the final four against OC power house Kings LC Gold.  Kings LC Gold was coming off their own quarter final victory over the Tritons.

The first period proved to be a precursor for things to come for Kings LC Gold.  They jumped out to an early 3-0 lead, which prompted Buku Blue Coach Johnny Rodriguez to call an early timeout in an attempt to stop the offensive onslaught.  The timeout helped settle Buku Blue down, and they finished the period with two unanswered goals by Billy Barron (driving the cage in the picture above) and Jake Lansner to bring the score to 5-2.

The 5-2 deficit was as close as Buku Blue would come though. The Kings displayed a wide variety of offensive sets and defensive prowess to take command of the game.  Buku Blue received goals from both of their face-off specialists Howie Gundy and Lansner (2) to finish out the second period.  Freshmen Jared Friesen finished Buku Blue’s scoring for the game and the playoffs with an unassisted goal from up top toward the end of the third period to bring the final score to 12-5 in favor of Kings LC Gold.  Kings LC Gold earned a spot in the finals against undefeated Crush.

Buku Blue finished the season with an impressive 7-0-2 record.