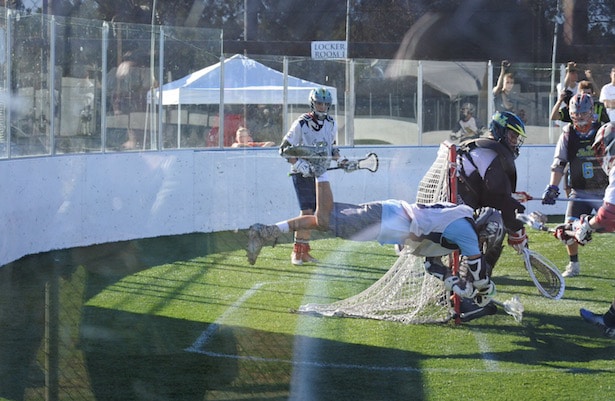 The Southern California Lacrosse Company Fall Box League playoffs began on Saturday, November 7th with beacoup Buku when the #2 ranked Buku Blue faced off against #7 ranked Buku Red in a quarterfinal matchup.  The game featured Johnny Rodriguez, director of Buku Lacrosse Club, working overtime as he coached both teams and found himself strategizing for and against the players he has coached, mentored, and motivated over the past few years.

The game began with Buku Blue jumping out to an early 2-0 lead with unassisted goals from Jared Friesen and Howie Gundy.  A few minutes passed until Buku Blue got back on the board when Jason Kauo (pictured above) tallied his first goal and Captain Billy Barron scored the first goal of his hat trick against a Buku Red triple team to bring the score to 4-0.  Buku Red answered with two of their own goals to close out the first period with momentum and a 4-2 score.

The second period saw Buku Blue take control of both the momentum and the scoreboard with a steady dose of a ball control offense and consistent goal tending from Kyle Thibault.  Thibault was a block wall in net all game, racking up over 15 saves through the first two periods.  Face off specialist Jake Lansner began the scoring with an unassisted goal, followed by another unassisted goal from Gordy Jennings.  Kauo notched his second goal and had a diving goal from behind the net disallowed for a crease violation, even though photographs proved it should have counted.  Buku Blue was anchored by a solid defensive effort from Josh McEnally, Brett Bickler, and Patrick Zanio.  The trio limited Buku Red to one shot during their offensive possessions and scoped up most of the ground-balls in their defensive zone.  The second period ended with goals from Noah Segovia, Griffin Caron and Barron and Buku Blue ahead 9-2.

The pace of the game slowed in the third period, however Thibault continued to stymy the shooters from Buku Red with his second straight shutout period.  Buku Blue received a goal from Jacob Preble on a nice assist from Kauo and Barron finished the scoring and his hat trick with the final goal of the game.  Buku Blue earned a 11-2 victory and a semi-final matchup against Kings LC Gold.