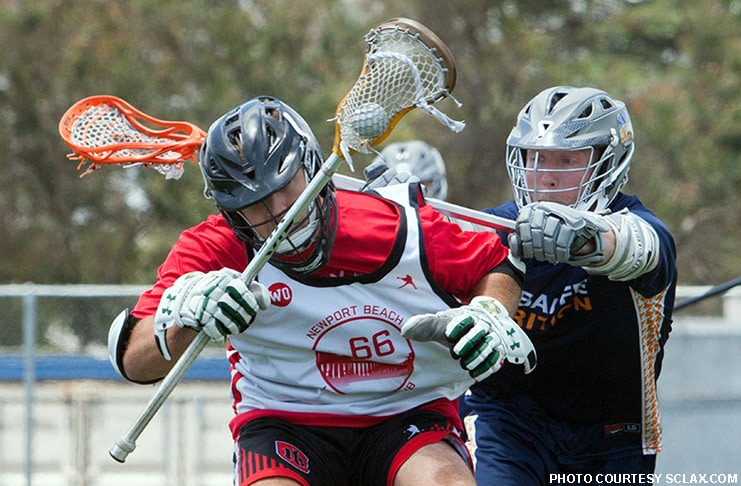 Two-time defending SCLAX post-collegiate league champion Beverly Hills will try to make it three in a row Saturday when it faces 40 Thieves at Culver City High School. The Bucks beat the Thieves 12-11 to win the 2015 SoCal title.

The winner of Saturday’s SCLAX title game will play host to the NorCal champion on June 24.

Below are game reports from SCLAX.com:

The semifinal was no walk in the park for this talented Beverly Hills squad. As hard as they practiced during last week’s bye, nothing could prepare them for Sunday’s battle against an equally talented Newport Beach Lacrosse Club.

Newport jumped out to a 1-0 lead, but after some back-and-forth play, the quarter ended with Beverly Hills up 3-2. The Bucks led off the second quarter with two consecutive scores, but Newport kept answering. The half ended with the Bucks up 6-4 thanks in part to an 8-4 edge at the face-off X and strong play by close and midfield defenders.

Beverly Hills scored first in the third, extending its lead to 7-4, but Newport pulled within 7-6 going into the fourth. Newport won the fourth-quarter opening face-off and scored man-up at the 18:10 mark to tie the game 7-7.

Each team added one more goal, so these two teams headed to overtime for the second time this season. Both teams had a few possessions but couldn’t find the net. Then, on a dead ball out of bounds, Beverly Hills put attack Andrew White (Stevenson) back on the field with just 23 seconds left. White already had a goal and four assists. He started with the ball, circled the crease then drove and dodged two defenders for the winning goal with only 12 ticks left. It was not enough time for Newport, and Beverly Hills walked away with a 9-8 overtime win.

40 Thieves had defeated San Diego decisively both times they met in the regular season, but San Diego was 5-0 against two really strong South Division teams, Beachcomber (the 2016 Champion) and Quiksilver, and we all know how difficult it is to beat a team three times in a row in any sport at any level. So the outcome of this game was certainly not predetermined.

San Diego jumped out to a lead at the end of the first quarter, as long possessions and the Thieves’ inability to clear the ball saw the visitors up 2-1 and looking primed for an upset. But the second quarter was all Thieves, as Dakota Rohlin (Jacksonville) scored twice, leading the Thieves on a 7-2 run.

Domination at the face-off X and on ground balls gave 40 Thieves all the possession time it needed to get into an offensive rhythm and build an 8-4 halftime advantage.

But San Diego wasn’t done. It opened the second half with two quick goals to cut the Thieves lead to 8-6. But 40 Thieves went on another scoring run, outscoring SDLC 5-1 the rest of the way for a 13-7 victory and a third South Division title in the last four years.