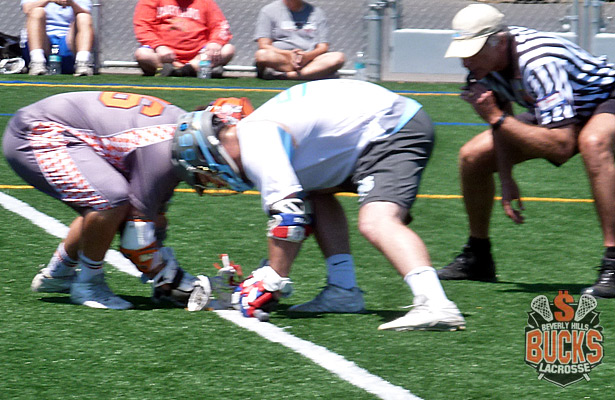 After leaving everything on the field in their thrilling last-second win over Forty Thieves two weeks ago, and plagued by injuries to a few key players, the Beverly Hills Bucks could not keep up with the extremely disciplined attack of the Barbary Coast team Sunday and ended up falling 15-6 in the men’s post-collegiate state championship game at Culver City HS.

After playing things relatively even for much of the first quarter, Barbary Coast broke it open, forcing five Bucks turnovers in the last few minutes of the period and converting them into three goals and a 5-0 lead after one.

Brett Tietjen finally got Beverly Hills on the board early in the second quarter, scoring on an assist from Jeffrey Evan to make it 6-1, and Kyle Jordan later notched the Bucks’ second goal, but they still trailed 8-2 at the half. The faceoffs were even at halftime, thanks to the continued success of Bucks FOGO Cyle Moskowitz.

Devin Maxwell, a Culver City coach playing on his high school home field, came alive in the third period, scoring off a dodge at the 17-minute mark and off an Evan Redwood feed at 3:42, but Barbary Coast kept scoring and took a 10-4 lead into the final quarter.

A non-releasable penalty on Beverly Hills in the fourth period led to three Barbary Coast goals to put the game out of reach. Will McCance scored for the Bucks on an assist from Charlie McNeil, and Maxwell got his third of the game for the final margin.