Buchman’s Dirty Dozen are Too Much for JSerra 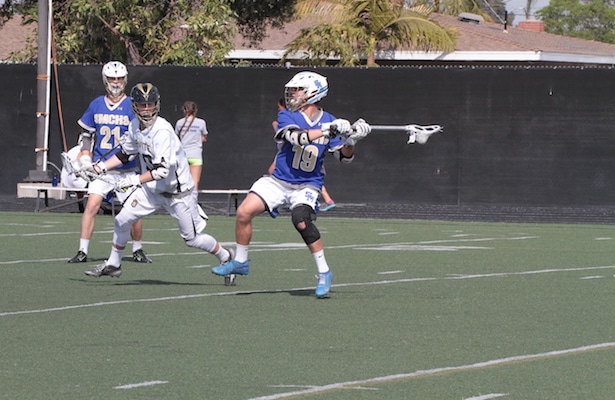 Santa Margarita established some separation from the rest of the Trinity League with a convincing  17-8 win over JSerra on Tuesday. The Eagles have swept through the first round of league play by outscoring their league rivals 43-20, and are in control of their own destiny with three league games to play.

As has been the case for the last two weeks, Santa Marg sophomore Quentin “Q” Buchman dominated the action.  In perhaps his best performance of the season, Buchman went off for a dirty dozen points with 7 goals and 5 assists. His most impressive point  came right before the half. Dodging from up top he got double teamed, drew a flag, took several checks, ran the ball behind and fed an open Shane Cobb for a goal.

Proving that he is not a one dimensional player, Buchman’s most impressive play was made in the riding game. In the third quarter the Eagles turned it over and a pole from JSerra picked up the ground ball and sprinted for the mid line. Buchman gave chase. He sprinted from 10 yards inside the box catching the deeman before mid field and running with him step for step until closing out an attempted dodge at the Santa Margarita goal line extended, throwing a check, and regaining the ball for the Eagles.

Buchman was not the only Eagles who was clicking.  Zack Taylor registered six points (3g, 3a). Logan Dochterman (2g) finished twice. Jack Fisher picked up a hat trick.    Jack Allender and Shane Cobb each netted one to complete the Santa Margarita scoring.

Defensively Santa Margarita was lead by CJ Deal and Eric Rubak. The senior duo has been together since the eighth and have grown into one of the better defensive tandems in the OC.

Emerson Roth led JSerra with a hat trick. Hunter Neal had 2 goals, Vinnie Ciffarelli and Evan Jones each scored one.  Austin Shackelford was 16/29 on faceoffs (55%).

Devin Arkison was a 3X All American at Hobart College. he is also a member of the NJ Lacrosse Hall of Fame. he coaches elite high school and work privately with all levels of defense. his most recently committed pplayers are to Notre Dame, Denver and St Joes. he can be reached at d_arkison@hotmail.com