Santa Margarita Victory is Taylor Made 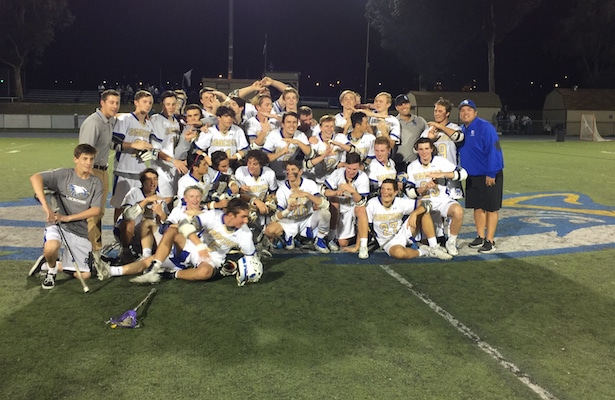 Santa Margarita senior Zach Taylor made his last home game a great day to be an Eagle.  Taylor went off for eight points (3g, 5a) to lead Santa Margarita to a 17-6 win over No. 5 Great Oak and a trip to the County semi-finals on Saturday.  The No. 4 Eagles play No. Corona del Mar.  Santa Margarita has not made it this far in the playoffs since 2012.

The athletic and physical Wolfpack gave Santa Margarita everything they could handle for the first half of the game.  The first quarter was played at a blistering pace and ended with the Eagles clinging to a 4-3 margin.  However, Chase Lynch (20/23; 88%) was controlling the faceoffs and as the game approached halftime, it appeared that Santa Margarita’s possession advantage was beginning to take its toll on the Great Oak defense.   Santa Margarita scored the final two goals of the second quarter to head into halftime with a  7-4 lead.

Adam Utter (2g, 1a) scored for Great Oak about three minutes into the third quarter to make it 7-5 and it looked like the game may go down to the wire at that point. Quentin Buchman (6g, 1a) had different plans though and he scored the next two to ignite a Santa Margarita six-goal outburst that had the Eagles in control at 13-6 with twelve minutes left to play.  Santa Margarita controlled the remainder of the game to claim the 17-6 victory.