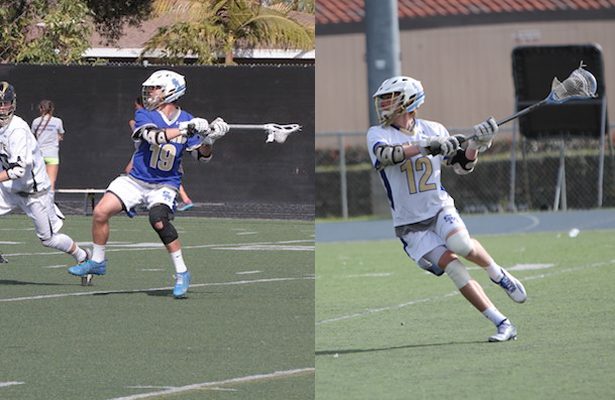 Santa Margarita’s Quentin Buchman (no. 19 above) and Logan Dochterman (no. 12 above) share the honor of offensive player of the week for the week ending April 23.  The two captains combined for a total of 17 points in the final two games of Santa Margarita’s regular season.   Buchman, the Bryant-bound sophomore, let the Trinity League know what they have to deal with for the next two years with four goals against Servite and seven points (6g, 1a) against JSerra.  Doc, a senior who will be heading off to the University of Illinois in the fall, said farewell to the Trinity League with a 5g, 1a performance against Servite and 4 goals against JSerra.

Head coach Adam Guy had this to say: “Quentin has been playing lacrosse with a purpose lately, he is a workhorse on and off the field and the hard work is paying off for him. I’m really proud of Q’s ability to adapt to what defenses are thrown at him and how well he’s able to improvise.”

“Logan has been a staple of our offense for 3 years, he is consistent, smart, and opportunistic. He is playing with a renewed energy right now as I think the realization that his senior season and career at SM are coming to a close. He is an integral part of our team.”