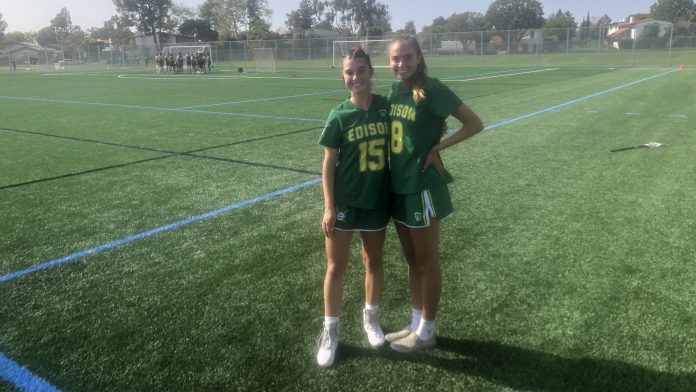 “Our offense has been struggling a little bit, so taking advantage of every possession we had in the first half was very important for us,” Chargers coach Olivia Smart said.

The Chargers entered the second half of Sunset League play a half game behind Newport Harbor. In order for Edison to win the league title and guarantee themselves a home playoff game in the first round of the CIF-SS Division 1 playoffs, it needs to win out its remaining league games, which includes beating Newport Harbor in the league finale.

After the Chargers allowed the first goal 44 seconds in, they rattled off the next three goals with two coming from Bryant and one from Melanie Wieland, leading 3-1. Abby Grace scored for CdM at the 16:23 mark to close the gap to 3-2. However, Bryant was not only scoring goals she was creating opportunities with her draws (19/26 for the game) and the Chargers started advantage. The Chargers went on a 7-2 run to open a 10-4 halftime lead.

The Chargers opened the second half with a goal from Blakely Malpass at the 20:43 mark and 12 seconds later, Bryant won the faceoff and went straight to the goal to put the team up 12-4. After that goal, however, CdM managed to turn up its intensity defensively, as it held Edison scoreless for almost 18 minutes.

Offensively, the Sea Queens started coming up with groundballs, which led to offensive possessions. They scored the next five goals with three of those five goals coming from Belle Grace, cutting Edison’s lead down to 12-9 at the 9:16 mark.

“We were panicking and we don’t play very well panicked. We got [caused] a few turnovers in the beginning [of the second half] and they just started to panic a little bit. We’re usually very composed so it’s just about bringing composure back,” Smart said.

After over five minutes of neither team finding the back of the net, Amanda Cord scooped the ball up and a quickly fired a shot that went in, as the Chargers’ lead was down to 12-10 and the CdM faithful were buzzing in hopes of a comeback. But that was as close as it got, as Hoggard and Anna Beachner both provided goals to put Edison up 14-10 to clinch the win.

Beachner added two goals for Edison while Malpass, Wieland and Rylie Siegel each had one goal. The Chargers also got nine saves frim Cailien Gorsuch made nine saves.

The Sea Queens were led by Belle Grace who had five goals while Cord and Abby Grace added two goals. Shelby Glabman and Frankie Garcia each had one goal for CdM, which got five saves from Ellie Spotts.

While the Sea Queens are unable to clinch one of two automatic qualifying spots in the Sunset League, they can still apply as an at-large team for the CIF-SS Division 2 playoffs, as their record is above .500.