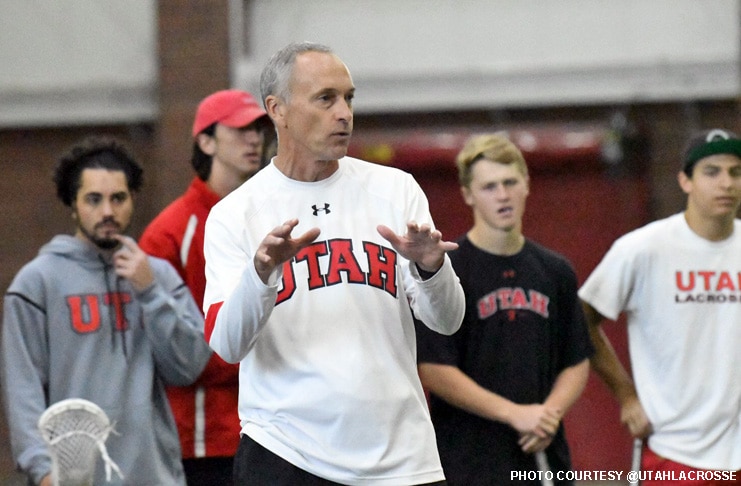 When the University of Utah lacrosse club hired coach Brian Holman away from North Carolina last summer, rumors and stories swirled about the Utes preparing to join the ranks of NCAA Division I. Officially, the school denied any such plan.

But since summer, Utah has received announced commitments from 10 players in the 2017 and 2018 recruiting classes, one of them from junior defenseman Hayden Rodenbeck of Servite, which begs the question: Are those players committing to an MCLA program or an NCAA D-I program?

According to Holman, who spoke with MaxLax by phone Monday, it’s the latter. He said he hopes to officially announce Utah’s ascension to NCAA D-I by next spring, long before the Class of 2017 graduates, and that the Utes will compete at the NCAA D-I level as soon as the 2019 season.

“There’s a plan in place to accomplish that,” Holman said. “The first hurdle really was committing to be here, bringing my staff and myself to Utah and settling into the community.”

Holman assembled a staff that includes his son, former North Carolina star Marcus Holman, former UMass All-American Will Manny, an assistant at Wagner the last two seasons, and former USC head coach Adam Ghitelman. All three play in Major League Lacrosse, and convincing recruits to consider Utah — where they will be coached by a staff with those credentials — hasn’t been tough, with or without an official announcement on the NCAA move.

“I’m not going to mislead anybody,” Brian Holman said. “I’ve been in this game a long time, and I have a pretty good reputation, and I’m not gonna tell a kid one thing when I know another. What I’m telling them is exactly what has been told to me by the university.”

The coach said the most realistic target for Utah to begin Division I play is the spring of 2019. Under that timetable, any Class of 2017 recruits would enroll next August without a D-I team during the 2018 season, their freshman year. Class of 2018 recruits would enroll in time for the program’s first year of D-I play. And there still is a chance the program could delay its D-I debut until 2020.

So far, that plan has been enough to prompt 10 prospective players to commit.

“The downside is you get to come and play for me and my staff at a great school and you get a great education,” Holman said, “and maybe you lose a year [in 2018].”

He also said, though, that once the timetable is made official, Utah could elect to withdraw from the MCLA for the 2018 season and only schedule scrimmages, thus preventing Class of 2017 recruits from losing that freshman year of eligibility.

Whatever steps the program decides to take once the anticipated announcement comes, Holman and his staff are hard at work lining up their future roster.

“We’re going to focus hard on the Western states,” he said. “We need the Eastern kids. They bring a little better lacrosse IQ, but the West Coast kids bring a lot of energy and athleticism, and that’s the way we want to play.”

The Utes are holding a Prospect Day & Clinic this weekend and have a three-day D-I & Pro Exposure Camp scheduled for Dec. 16-18 in Mesquite, Nevada (about a five-hour drive from LA).

Holman said he left his post as top assistant at the University of North Carolina for the opportunity to build a program from the ground up and to be on the forefront of the western expansion of the NCAA game.

“Utah will be a major power in lacrosse before too long, with proper funding,” he said. “There are a lot of advantages to playing at a school like Utah. The sky’s the limit here. I wouldn’t have come out here if I didn’t believe we could be in the national spotlight.”

Whether or not Holman is being overly optimistic, he rattled off some numbers to help illustrate some of the advantages a school like Utah can offer incoming freshmen lacrosse players, especially those from the West: Non-resident tuition at Utah is $24,276, but students from most Western states can apply for the Western Undergraduate Exchange (WUE) program, which would cut that non-resident tuition to $11,520. With D-I scholarship money somewhat negligible — fewer than 13 total scholarships to share among an entire collegiate roster — that kind of savings can make a big difference.

For now, the Utes will continue to play MCLA, including a likely appearance at the Pac-12 Shootout at UCLA in February, while establishing a blueprint that other Pac-12 schools — Stanford, Cal, USC, Arizona State, Colorado — might be able to follow.