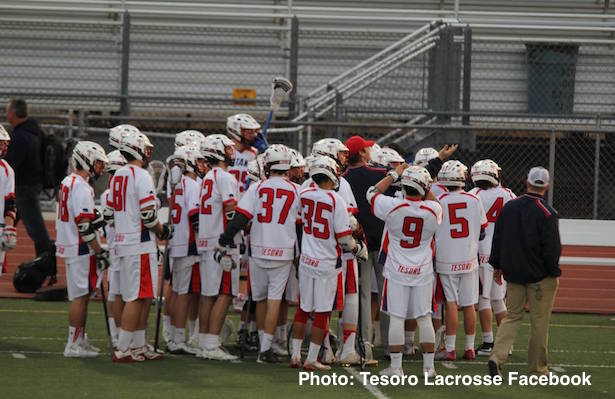 Braden King (1g/1a) opened opened the scoring with a quick first quarter goal.  Tesoro followed with another three goals: Ryan Harrington(1g/1a) unassisted, then Harrington feeding Brian Graves (7g), and Jason Moreta unassisted (2g/1a). The Cougar’s Gavin Gerbershagan (1g) returned fire by rolling from behind the cage to put the Cougars on the board. King gave it right back with a feed to  Graves who helped finish the quarter with the Titans on top 5-1.  The Cougars defense and goaltending pushed back hard but solid team play by the Titan’s allowed them to pull away starting with Moreta feeding Graves his third goal. In the final 2 minutes, the Titans put 3 more into the back of the net with Jonathan Gibson’s (2a) feed to Graves, then Graves with his unassisted 5th. Carson Spooner (1g, 1a) then assisted Moreta from X to give him his second for the night and close the half at 9-1.

In the second half, Capistrano Valley’s Clay Eggeman (2g) had something to say with a strong, coast-to-coast effort to score in the first minute and make it 9-2. Gibson responded with his second feed to Graves. Strong defense by both teams kept the remainder of the quarter scoreless ending the third at 10-2.