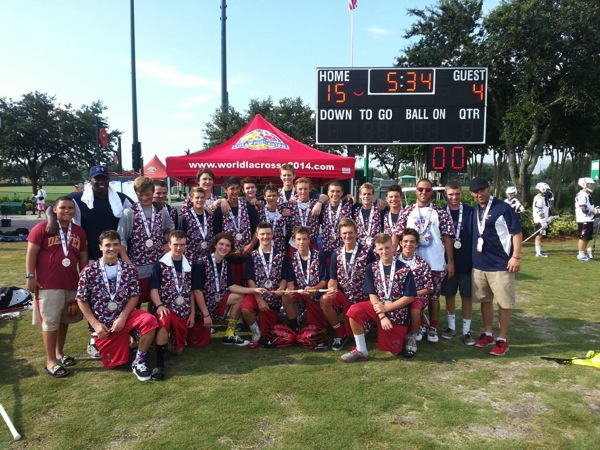 As the sweltering heat and thick humidity engulfed The ESPN Sports Complex in Orlando last week, 25 lacrosse teams from across the nation turned up the heat even more. Suiting up, facing off, running, dodging, checking, scooping, passing, blocking, and shooting their way towards the US Lacrosse U15 National Championship. As whistles blew, coaches yelled, and plays were executed, a group of people watched more than the scoreboards.

At the end of the Championships one deserving team would be awarded the highly regarded and prestigious Keeper of Lacrosse Award. The winning team which exemplifies honor, integrity and respect both on and off the field at all US Lacrosse events are presented large commemorative medals. “Character values are highly regarded at US Lacrosse, therefore the staff, officials and volunteers are asked to observe players, coaches and parents and cast a vote at the end of the event,” explained US Lacrosse Special Events Manager Ariana Andis-Klelin, adding, “The Brady’s Bunch team illustrated the true spirit of the game and personified their own team motto which made them the clear winner of this year’s Keeper of Lacrosse Sportsmanship Award.”

When asked to describe what it was like to win the Keeper of Lacrosse Award and to be a part of Brady’s Bunch, Goalie Payton Fales, (St. Margaret’s Episcopal School) responded, “Winning the keeper of lacrosse award was a complete honor. Winning it was a validation for myself and the entire team that the work we were putting in on and off the field to become better lacrosse players and better people was being recognized. To me, playing with Brady’s Bunch means the world. Every single time I put on a Bunch uniform I feel inspired work a little bit harder to make a save, or run a little bit faster after a shot. Playing with Brady’s Bunch is about more than just winning, (though we often do) and looking the best, (which we always do), Bunch is about playing for someone besides yourself, it’s about value, it’s about becoming a better person, but most of all, Brady’s Bunch is the only team where you could meet your whole team Friday night and go home Sunday night with 20 new best friends. Brady’s Bunch is more than a team. We are a family.” The other half of Bunch’s OC goalie duo, San Clemente High School’s Austin Boyer agreed, writing: “The level of competition at this tournament was incredible and I am really proud of the way we came together as a team and held our own against unbelievably talented clubs like Long Island Express. Winning the Keeper of Lacrosse award for sportsmanship says so much about Brady’s Bunch and our approach to the game. It just makes the experience so much more rewarding.”

On the field, the BUNCH made a lasting impression as well. Coach Tom DeMaio (JSerra) led the boys to place in the top half of teams competing. In pool play, two one goal games vs. Florida and Texas left the BUNCH with a 1-2 record. They went on to play the Long Island Turtles who had beaten teams in the first two games by a margin of 23 goals. Brady’s was up to the task, and fought hard, but eventually lost to the Turtles, 10-6 .

Brady’s saved their best for bracket play on Saturday as it was clear this group of kids from all over the West was starting to gel. The offensive firepower of San Clemente’s Nicholas Demaio and Nicholas Lemus led the BUNCH to a 7-4 victory over a strong Utah team in their first game of the elimination round on Saturday. Demaio’s three goals and Lemus’ four assists and ground ball play proved to be too much for the Utah squad. Next up, Brady faced No. 1 seed, Long Island Express who had only allowed a total of five goals in the first two days. Brady’s played them tight taking a 3-2 lead into the quarter and a 4-3 game into the second half. In the end, Express pulled away for a 12-5 victory, but it was clear Brady’s was their most formidable opponent to date.

After beating FCA 15-5, Long Island Express went on to lose in the Finals to 3d National by an impressive margin of 10-4. 3d was the No. 2 seed and went undefeated over the weekend, marking the first time that a Western based team has won the event.