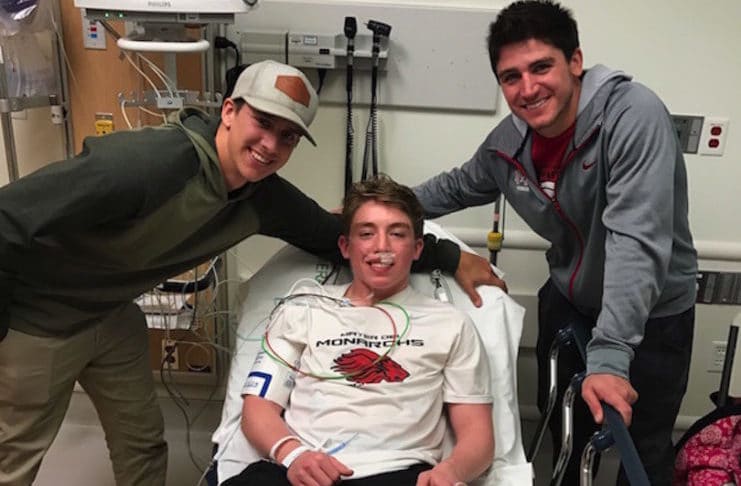 Burwell finished his junior season as a team captain and won the Monarch Award for showing the most passion to the game and commitment to his team. He came into his senior season as the Monarchs’ top offensive player. Unfortunately, two weeks before the start of the season he sustained a horrific injury to his foot, breaking several bones and destroying multiple ligaments.

“After witnessing the injury and spending a night in the hospital with him, I was convinced there was a chance that Brady may never play lacrosse again. The doctor said Brady would have to have surgery so that he could insert a metal plate in his foot and that he wouldn’t be able to walk on it for months.”

“Brady was at practice the very next day asking what role he could fill on the sidelines to help out the team. He was replaced with two inexperienced freshmen, who with Brady’s mentoring, are now two of the most talented freshman lacrosse players in Orange County. He told me the day after his surgery that he would be back in time for the playoffs. After two months of consistent two-a-day rehab sessions, after school, and before or after practice, Brady slowly started making me and the rest of the team believe that he had a chance of a late season return.”

“During our last regular season game on senior night, Brady walked on the field for the first time in his senior season with two minutes left in the game. He received a standing ovation from all the Mater Dei supporters and even some parents from the opposing team.”

“He showed he had overcome something that everyone, even his own parents and coaches doubted him on in the beginning. He played well enough in that two minutes to show he was ready to start on the man-up team in our first playoff game last night.”

“Brady’s story this season is much deeper than overcoming an injury. His love for the game and his teammates was his inspiration to do everything he could to get back on the field and that was a true inspiration for hundreds of people who followed Brady’s story over the past few months.”

“Brady currently holds a 3.8 GPA and will be attending SDSU to play lacrosse and looks to major in business.”