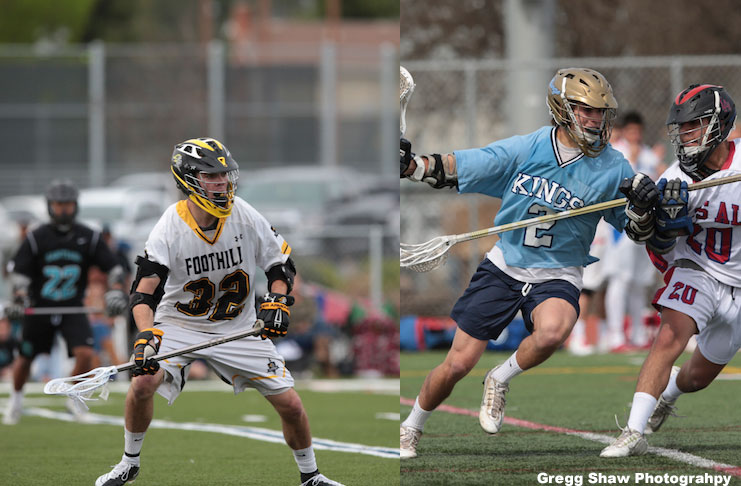 The Orange County boys lacrosse championship will be contested Wednesday night by two teams that have been there before.  Corona del Mar is the defending champ and has won it twice. Foothill has won it a total of six times since the Orange County and Los Angeles Chapters of US Lacrosse began sponsoring the Southern Section championship tournament in 2007.

Wednesday’s game between CdM and Foothill will feature some of the best talent in the state. CdM is lead by a strong senior class. Jordan Pakzad ( Rutgers) and Brennan Greenwald (Drexel) lead a dominating CdM defense that has been the hallmark of the Sea Kings program. Pakzad and Greenwald have not only continued the tradition but have carved out their own legacy that compares favorably to the one left behind by 2015 alums Hugh Crance ( Notre Dame) and Brett Greenlee (Denver). Pakzad based on his matchups this year is most likely a top candidate for OC player of the year. In addition look for standout junior Landon Whitney to be a factor.

The CdM offense is lead by seniors Will Favreau and Sachin Gokhale. Both have the ability to take over a game. In addition, senior sniper Ryan Meckler has had a big year and will be a concern for the Knights defense.  Meckler earned Most Outstanding Player honors in this game last year.

Senior faceoff specialist Nick Puglia has been very tough at X lately. CdM assistant coach and Duke legend Brendan Fowler has been brought in to run the defense in 2017 and has tutored “Pugs” as well.

In goal for CdM is sophomore Kyle Cord. He is a first-year starter, and although new to the big game scene the Kings have gone 18-2 with him in the cage so he’s had a full season of experience.

Foothill has their own tradition of excellence at the attack position. Ellis Geis had seven goals against San Clemente on Saturday.  He is the latest Knight to enter the Foothill-to-Denver University pipeline. Former Knights standout attackman Nate Marano and Eric Adamson had prolific high school careers and went on to play for the Pioneers.

Defensively, Foothill is led by senior George Dalis. He can play close or LSM, and can cover and push transition. Kenny Algeo is back from an injury to bolster the close defensive unit.

Faceoff middie Miles Smart was a difference maker vs. San Clemente.  The Tritons used a pole to tie up the junior on Saturday with limited success.

Senior Austin Mann is a veteran keeper with a wealth of experience between the pipes. This year alone he has faced top teams from California, Maryland, Texas, and Colorado. He should not be phased by the big stage.

Devin Arkison was a 3X All-American at Hobart College. He runs LockdownD.com here in OC.