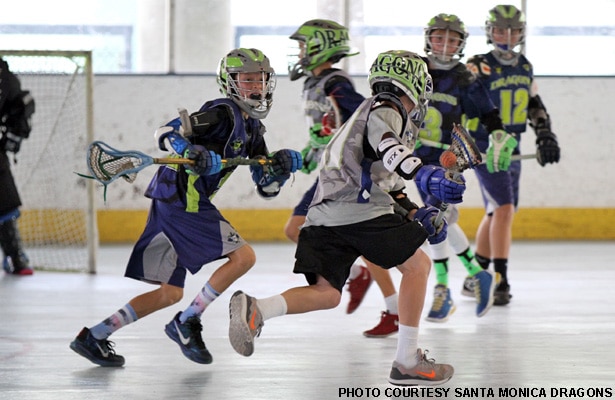 Dragons Blue, made up of seventh-graders, held off the sixth-grade Dragons Green 12-8 in the U13 division on Sunday (pictured), but the news of the weekend was the first win for Dragons U11 and the first loss for Cobras Black in the varsity division.

Dragons 7, Leverage 6
“Our JV team found themselves in a battle to determine whether or not they’d make the championship round. The game went back and forth for three periods, and the teams traded leads several times. Late in the third period, Mason Carter came up with a big goal to tie it up for us. Then disaster struck. We got hit with a double penalty and went two men down. We were sure that it was lights out for us, but Jack O’Rourke took possession and flew down the rink to score the game winner.”
— Matt Cannone, Dragons

Sunday, Oct. 25
U11
Trident Blue 8, Leverage 7
“U11 games continue to be back-and-forth, non-stop action. The Leverage-Trident Blue game was another example. With Leverage down a man, the game came down to a last-second shot by Leverage that hit the pipe as the game clock ran out to give a very talented Trident Blue team an 8-7 win.”
— Chris Jewett, Leverage

Dragons 8, Trident Orange 5
“The U11 Dragons team has had an up-and-down season but really responded well after a hard week of practice, finally managing to get a win against Trident Orange. It was a team win that started with the defense and determination to get back in the hole. Robbie Lennartson played great between the pipes and came up with some big saves. Will Chandrasekhar and Miles Tropea both added key goals in the win.”
— Matt Cannone, Dragons

U13
Dragons Blue 12, Dragons Green 8
“This was a tough battle in the ongoing internal rivalry of 6th grade vs. 7th grade. An early surge by Owen Gaffney and Luken McGuire allowed Dragons Blue to jump out ahead. But this did not stop the Dragons Green boys from battling back. Matteo Silvestri and Crawford Cushing both scored big goals, and the team never gave up. But in the end, it was not enough, as the game finished 12-8 in favor of Blue,”
— Matt Cannone, Dragons

Leverage OC 14, Leverage LA 8
“We mixed the teams up and had LA play OC. The game was very close until the end, when OC pulled away to win 14-8. Luc Rettberg led the OC team with two goals and five assists, while Nick Butler stood out on the LA team with five goals and one assist.”
— Chris Jewett, Leverage

Dragons 8th def. Factory/SBLC
This was the last game in the El Segundo series for the Dragons 8th grade. We trailed all game, looking a little sluggish from a week off. But we were able to mount a comeback in the last quarter. Spencer Wynn got us started with a goal in the final five minutes, followed by a goal from Gideon Hyman to tie it up. With 60 seconds left, Luke Sganga made a huge save and cleared the ball to his brother Matthew Sganga, who streaked up the court and scored the game-winner with one second on the clock! This meant that the Dragons 8th finished its box season in El Segundo undefeated.