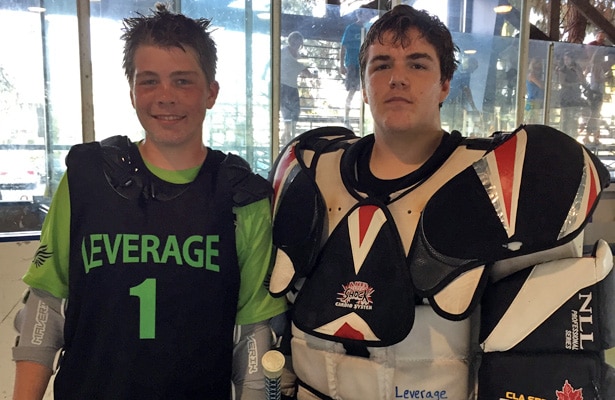 Six goals from Josh Bettger (left) and strong play in goal from Cullen Murray (right) carried the Leverage JV squad to a 10-3 win over the Santa Monica Vikings in the L.A. Box Lacrosse League on Saturday.

Leverage 10, Santa Monica 3
The Leverage JV team had a great win against an improving Santa Monica team. Leverage was led by Josh Bettger, who had six goals, and Cullen Murray, who played fantastic in goal!
— Chris Jewett, Leverage

Dragons 7, Shock 7
Our JV tied Shock 7-7 in a late-game comeback. We were down five players, so the game was a struggle. But the Dragons players stuck together and fought their way back late in the third period to tie up the game. Jack O’Rourke contributed with a huge game at the X and on offense. Reilly Olds also played a strong game. A big goal by Joesph Kean sparked the come back.
— Matt Cannone, Dragons

Sunday, Oct. 18
U11
Leverage 11, Dragons 4
With only 5 players and a goalie, the Leverage U11 team pulled out a great win against a talented Dragons team. Leverage was led by JP Plantinga and Connor Engel.
— Chris Jewett, Leverage

Santa Monica Vikings 12, Dragons 6
Our U11 had a rough weekend with back-to-back games, and we went 0-2 on the weekend. On the bright side, Robbie Lennartson stepped up in cage and had a great outing between the pipes. It’s back to work for the U11 Dragons this week at practice.
— Matt Cannone, Dragons

The talent in the youth divisions in the LA Box League this season is the best we have ever seen! Can't wait 2C LA HS lax 5 years from now!

U13
Leverage Black 15, Beach 2
Leverage Black 8, Dragons Blue 5
The Leverage Black U13s were short boys but were able to pull out two very gutsy wins against a good Beach Cities team and a very competitive and talented Dragons Blue squad. These two wins kept the U13 Black team undefeated. I was extremely proud of the way the boys came together as a team to get these two wins!
— Chris Jewett, Leverage

Our 2021 came out strong and had a great first period. Evan Miner led the way with some big stops on the door step. But we spent too much time in the penalty box, and in the end, playing man-down on multiple occasions allowed Leverage to take the lead. With two minutes left we closed to within two goals and looked like we might make a comeback. But we lost a critical face-off, and Leverage scored on the ensuing possession, putting the game away.
— Matt Cannone, Dragons

Dragons Green 10, Leverage Green 3
Our 2022 was down players but came ready to play. The boys started off hot playing unselfishly and scoring goals. Leverage had a strong push in the second period, but it wasn’t enough, as Angus O’Connor netted three goals, leading the way for the Dragons. Dante Meloni had a strong game on offense and defense, adding to the win. And we had another great performance from Austin Sauter in the cage.
— Matt Cannone, Dragons