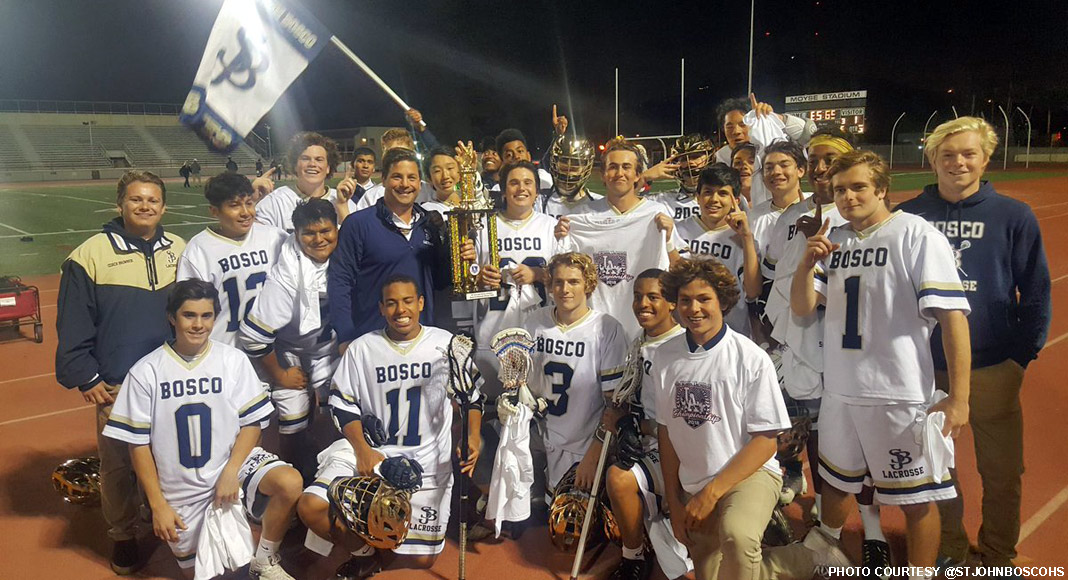 St. John Bosco, in only its second season of CIF play, defeated Newbury Park 9-8 in overtime Friday to capture the championship of the US Lacrosse Postseason Invitational Tournament at Glendale HS.

Coming off a screen set by freshman midfielder Braden Woomer, junior midfielder Mitch Myers took a pass from freshman attack Sean Park, set his feet and ripped a hard overhand shot past the Newbury Park goalie for the game-winner.

The No. 1-seeded Braves (13-5) had beaten Culver City and Valencia to reach the title game. Newbury Park (8-12) advanced by beating Dos Pueblos and West Ranch.

Carieri had given the Braves a 7-6 lead with 10:20 to play, but Newbury Park tied it up three minutes later. Park scored with 4:21 remaining, but the Panthers scored the tying goal with 20 seconds left to force overtime.

Myers, a face-off specialist committed to NCAA Division I Bryant, ultimately lifted the Braves to the title with the game-winner.

Though the Panthers had scored to take a 1-0 lead early on, Bosco quickly took a 2-1 lead and extended it to 4-2 after the first quarter. Newbury scored twice in the first minute of the second period to tie it 4-4, then again with 3:26 left in the half to lead 5-4, but Woomer’s goal evened the score at 5-5 at halftime. The score was tied again 6-6 heading to the fourth quarter.