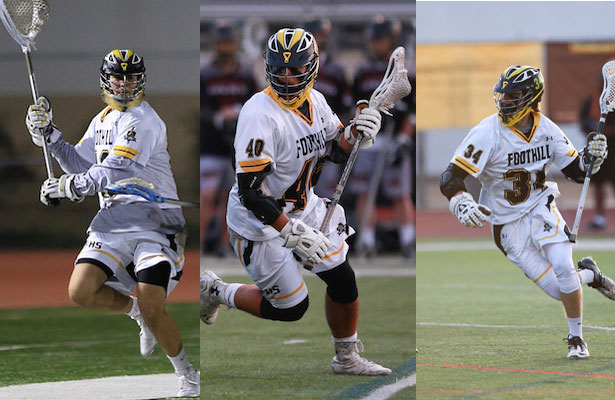 Foothill High School head coach Jon Fox announced that seniors Ryan Blank, Matt Harris, and Kevin Kodzis have been selected by their Knights teammates as the captains for the 2015-16 academic year.   Fox said “I expect all our seniors to be heavily invested in leadership roles and guiding the team, however three individuals have been selected to focus on putting the team first, and be responsible for making their teammates better.  These three have shown continued interest in the team’s well being, they lead by example first, and are dedicated to passing on the Knights tradition and work ethics down to the younger classes.  These three have made an impact for the program since arriving at Foothill, and I’m very excited that the team has chosen them as Captains.

Blank (left in the picture above) is  a senior goalie who wears number 12 for the Knights.  He is committed to play Division 1 lacrosse at St Johns University next fall.   Blank led the Knights to a 20-2 record last season and held opposing teams to 7.5 goals per game while recording a 56.16% save percentage. Coach Fox: “Ryan is a big stopper with tremendous outlet passes and is an emotional leader of the defense.  Ryan’s really excelled since his breakout game vs LCC in 2014. Don’t be surprised to see him break out his inner Brett Queener this year if teams leave him uncovered on the clear.”

Harris (center in the picture above), a senior midfielder, wears No. 40  for the Knights.  He is one of the top uncommited seniors in the County. Harris is a three-year letterman and plays for the SoCal Express.  He played in all 2 games last year and notched 30 points (20 goals, 10 assists). Coach Fox: “Matt is a beast of athlete that can stretch the defense with an outside cannon of a shot. Matt is our top performer in the weight room, and knows how how to grind out hard work. Highlight performances came in last years overtime victory over Massachusetts State champs, Medfield HS.”

Kodzis (right in the picture above), a senior attack  wears No. 34.  The future Holy Cross Crusader is a four-year varsity player, a member of the 2016 Under Armour All American West Team, played for the West Coast Starz National team, is ranked as a Recruiting Rundown Top 100 Lacrosse player in the US, and was 2nd Team All County in 2015. He averaged 3.3 points per game in 2015 on 47 goals and 23 assists. Coach Fox: “Kevin is shifty hard nosed dodger with intent to score. He is a well rounded player with ability to use both hands with equal results. Expect to see lots of assists this season as teams will have to leave others open in order to stop Kevin. Additional experience this summer as part of the Under Armour west team has primed him for the upcoming season.”