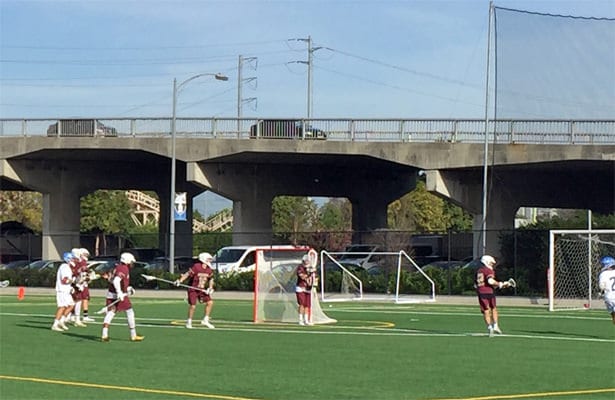 Bishops opened its season Friday with a long road trip to take on Bellarmine College Prep in San Jose, Calif., and it took the Knights a little time to shake off the road rust. The Bellarmine Bells jumped out to a 6-3 lead after one quarter, but Bishops recovered and rallied, ultimately claiming a hard-fought 10-8 victory.

Sophomore attackman Garth Erdosy restarted Bishops offense with a first-half goal, as the Knights pulled to within 6-5 at halftime.

The Knights came out of the break reinvigorated and firing on all cylinders. Seconds into the third quarter, sophomore midfielder Isaiah Dawson dodged from up top and dropped a well placed lefty shot in the cage, tying the game at 6-6. Soon after, senior midfielder and Michigan commit Christian Ford fought through three defenders to drop an inside shot on goal to give Bishops its first lead since Dawson’s opener early on.

Consecutive penalties slowed the Knights down, but their defense kept the bleeding to a minimum with discipline and hustle as exemplified by the first-year junior defenseman Justin Woodley‘s continued harassment of Bellarmine’s offense.

After two man-up goals, Bellarmine’s talented team raced the clock in an attempt to reclaim the lead. Unfortunately for the Bells, the Knights pulled away to a 10-8 lead after an assist from Erdosy to Dawson and a critical save by junior goalie Nick Semo with a minute to play. Semo’s second-half performance locked down the cage and held the Bells to only two goals.

Bellarmine senior midfielder Will Mingrone, the benefactor of a forced turnover, took a shot on goal with 20 seconds to go, but it went wide.

Hastings and Erdosy scored three goals each for Bishops, and Ford, Cal Costa, Racer and Dawson each scored once.

Watching the season opener it seems likely that Bishops high-powered offense will be one to watch as they find their rhythm, spread the ball, and potentially pose a threat from all angles. The defense, composed largely of new players and those returning from injuries, showed it can make life difficult for a high-level offense like the Bells.

Bishops continues its road trip with a game against Oak Ridge (El Dorado Hills, Calif.) on Saturday at Bellarmine before returning to San Diego to play Castle View (Castle Rock, Colo.) on March 22.