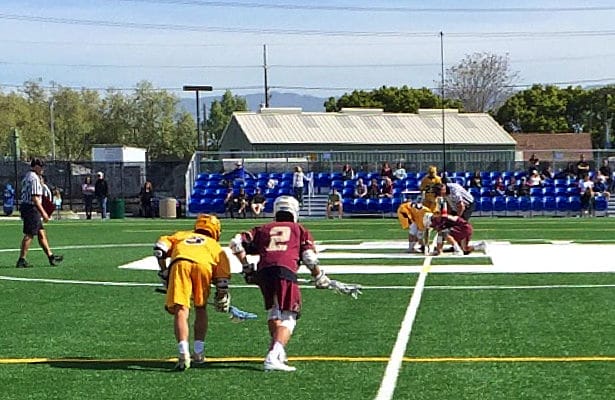 The Bishop’s Knights continued their San Jose road trip with a back-and-forth battle against Oak Ridge of El Dorado Hills on Saturday, taking a quick 3-0 lead but needing a fourth-quarter defensive stand to clinch a 13-12 victory at Bellarmine Prep.

Senior Christian Ford (Michigan) opened the game with an immediate transition goal out of the first face-off, starting a three-goal run for the Knights. Oak Ridge got on the board with a goal by junior attack Hayden Dall off an assist from Gage Webb, and the first period ended with Bishop’s leading 3-1.

Oak Ridge rallied in the second period, though, eventually tying the game 6-6 on an unassisted goal by Webb, then taking a 7-6 lead. A high-velocity lefty rip by Ford pulled Bishop’s even again, closing out the half at 7-7.

The back-and-forth scoring continued in the second half, with the Knights’ Ford, Ryan Hastings, Garth Erdosy and Cal Costa trading goals with Trojans Sam Wellman, Dall and Webb. Oak Ridge was relentless, eventually taking its second lead late in the third period at 11-10, but Hastings scored unassisted just four seconds before the horn to tie it 11-11.

Costa and Ford each scored in the fourth quarter, while strong defensive play held Oak Ridge to only one and enabled the Knights to escape with the close victory.

Dall led Oak Ridge with five goals and three assists. Bishop’s players Justin Woodley, Wyatt Chase and Logan Zeigler put up strong stats on the defensive side. Offensively, Bishops Ford led the charge not only by scoring an impressive 5 goals, but also by dominating at face-off.