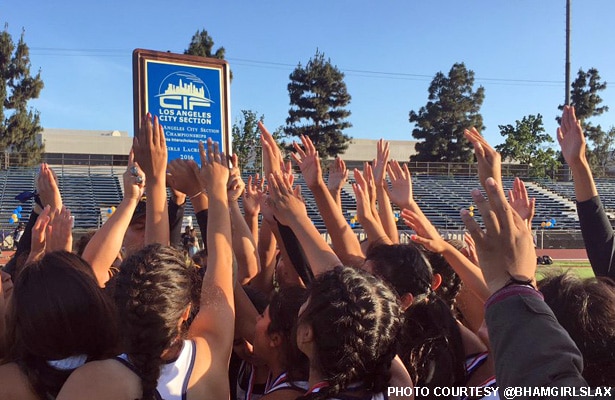 For the third consecutive season, the Birmingham girls defeated Palisades to claim the City Section lacrosse championship, Friday at Birmingham, the Patriots beat the Dolphins 7-3 to hoist the plaque. On the boys’ side, Palisades beat Hamilton 19-9 to with the City title.

The CIF City Section, unlike the Southern Section, holds a championship tournament. The Top four teams from the regular season qualify.

The Southern Section doesn’t hold championship postseason events for a sport unless 20 percent of the section’s 579 member schools — or 116 schools — participate in that sport. For the 2016 season, the CIF-SS listed 84 boys lacrosse teams and 72 girls lacrosse teams.

This year, Birmingham and Palisades had split their two regular-season games, with each winning at home, and Birmingham also had beaten Pali in a shorter tournament game this season. But all three meeting were close and low-scoring. Friday, the Patriots jumped out to a 5-0 halftime lead, stretched it 7-0 early in the second half and were in control the rest of the way.

Both Birmingham and Palisades earned berths in the US Lacrosse Southern Section tournament, a championship event held in lieu of an official CIF Southern Section championship. The Patriots were seeded sixth and beat West Ranch 6-5 before falling to No. 3 (and eventual runner-up) Redondo Union in the second round. Palisades was the No. 16 seed and lost to eventual champion Oak Park in the first round.

On the boys’ side, Palisades won its second City Section plaque with a 13-goal outburst in the second half. The Dolphins led Hamilton 6-4 at halftime but opened the second half with a 6-1 scoring run to lead 12-5.

The Yankees responded with a three-goal run, cutting the margin to 12-8, but Pali closed out the game with another burst, outscoring Hamilton 7-1 over the final 9:40.

Hamilton actually led in the early going, taking an initial 2-0 lead and leading 2-1 at the end of the first quarter.

But Macchio Rissone tied it for Palisades to open the second quarter, touching off a run of four unanswered goals, three by Rissone, to put the Dolphins up 5-2 midway through the second period. Rissone finished with six goals and three assists.

Palisades (22-4) finished its season with consecutive wins in the City tournament after winning a preliminary game in the US Lacrosse Southern Section tournament to earn the No. 16 seed, then losing to No. 1 seed Palos Verdes.

Last year, the Dolphins beat Hamilton in the first round but lost to Birmingham in the City championship game.