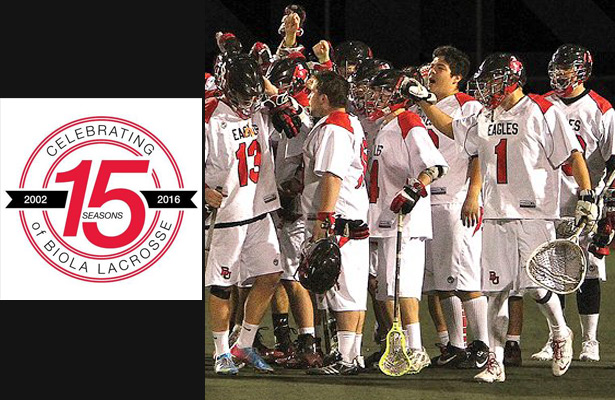 Two years ago, the Biola Eagles went 10-6 and made the Southwestern Lacrosse Conference Division II postseason tournament. Last year, though, the Eagles slumped to a 4-9 finish. But head coach Aaron Klett, a Biola alum entering his eighth season at the helm, is hoping for a turnaround in 2016, thanks to a roster featuring nine returning players.

The Eagles opened their season Saturday with a 7-6 loss to St. Mary’s of Moraga, but the positive take-away is that Biola rallied from a 4-1 halftime deficit to tie the game 6-6 before surrendering the game-winner in the final two minutes. Biola plays host to USC on Monday in La Mirada.

Coach Klett took a few minutes to share his thoughts on his roster and the coming season:

“We have a fairly small roster of 16 players — nine returning players from 2015 and seven guys who are new to the team. There is a great amount of talent coming back with the returners and two grad-school additions from the University of Arizona and Monroe CC in Rochester. We’ll be a small but talented and determined team.”

… we play to the best of our ability in every game and honor God every time we step on the field. Our goal is to be an excellent team on the field; our purpose is to show others what a Christian lacrosse player is.
— Aaron Klett, Biola head coach

The Biola Eagles feature a handful of players on their roster who have local ties: