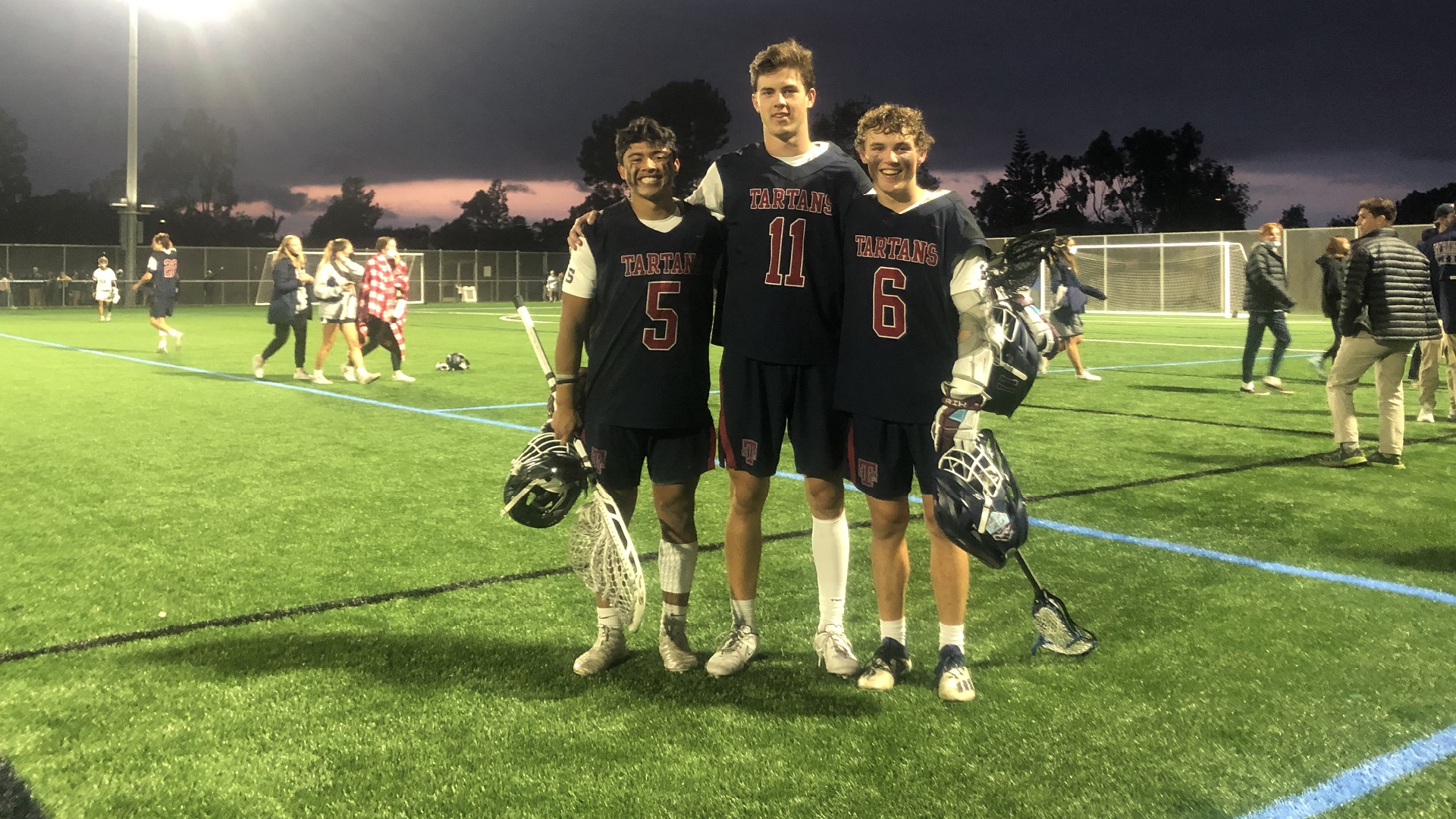 Owen Binder (pictured right) scored the game-winning goal with 2:22 remaining in the overtime period, as No. 2 St. Margaret’s defeated No.6 Corona Del Mar 9-8 on Friday at Corona Del Mar in a Top 10 duel that lived up to the hype.

The Sea Kings and Tartans have a long history of well played games going down to the wire and this was no exception.

Will Stahl (pictured middle) forced the overtime with his fourth goal of the game with just 1:21 remaining in regulation. The Tartans lost the OT faceoff and called timeout after getting the stop and the ball back. With perfect execution of the play drawn up in the huddle, Matt Groeninger (3g, 2a) got the ball, dodged, drew the slide, and found Binder on the back pipe who finished the game.

“I think it was awesome. I didn’t get to play a season last year [due to the pandemic] and I was a freshman, so this is like my first experience doing this stuff and scoring that goal filled me with joy,” Binder said.

The game had a playoff-like atmosphere fans from both teams cheering enthusiastically and enjoying a rivalry has produced more than its fair share of memorable game. Neither team led by as many as two goals and both teams played as if it was a championship game.

After the Tartans struck early with goals from Stahl and Groeninger, the Sea Kings got on the board at the 4:49 mark courtesy of a low goal from Logan Ip (4g). Jake Fuentes then scored the first of his two goals, leaving the game tied at 2-2 at the end of the opening quarter.

“Hats off to them, they’re an unbelievable team. I feel like with the shortened season last year, and everything we’ve seen this far, no one’s defended us like that, so huge credit to them,” Tartans coach Brian Kelly said of the Sea Kings.

The Sea Kings went up 5-3 after Shawn Frome (2g) scored at the 7:52 mark, and their defense continue to put pressure on the visiting team. In addition, Newton continued to excel at the faceoff position for CdM.

The Tartans’ scoring drought lasted for another 7:07 until Groeninger scored at the 4:53 mark of the third quarter to ignite a three-goal run. Binder and Stahl added goals to give the Tartans a 6-5 lead heading into the fourth quarter.

Ip scored on back-to-back goal almost one minute apart from one another as the Sea Kings led 7-6, but a little over a minute later, Riley Chester (1g, 2a) was there to tie the game at 7-7. Chester giveth and Frome taketh away with a goal at the 6:06 mark to give CdM an 8-7 lead at 8-7 an opportunity to chew up the clock or find an insurance goal. Unfortunately for the Sea Kings, Stahl didn’t get the memo and he tied the score at eights with 1:21 remaining. The Sea Kings got one final possession to win it in regulation, but their entry pass was broken up, and the two teams went to overtime.

“I think the thing I’m most proud of is that our guys just stuck together, they stayed resilient, they found themselves down a whole lot in the game and they clawed back and I thought CdM just did an awesome job of answering,” Kelly said. “Our guys just stayed in it.”

Both goalies played well against two sharp shooting teams. Sebastien Chicas had eight saves for the Tartans and Wyatt Rieden had six for CdM.

“It was a terrific game, two really good high school lacrosse teams going at it, we know each other pretty well and it’s certainly not the first close game with one another,” Mix said.

Next up for the Tartans (7-1), a home game against Yorba Linda on Tuesday at 5 p.m. For CdM (4-2), it will have a week to heal up and prepare for a road game against Foothill next Saturday.