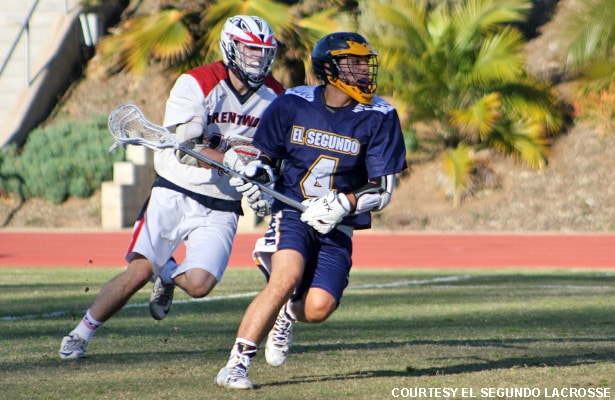 Brentwood School improved to 4-0 Tuesday, breaking open an 8-4 game at halftime with a big second half to defeat visiting No. 18 El Segundo 17-7.

The host Eagles, ranked No. 15 in the latest coaches poll, split two games with El Segundo last year, winning 19-16 at home in the regular season but losing 17-12 at El Segundo in the playoffs.

Tuesday, Brentwood jumped on El Segundo early for a 5-1 lead after one quarter. Despite a strong performance from Cory Lund (14 of 16) and Daniel Ball (5 of 9) at the face-off dot, the Eagles struggled to maintain possession and run their offense in the face of a dominant Brentwood defense.

Brentwood, in its second season under coach Skyler Hopkins, is off to the best start in the program’s history. Three times the Eagles have started 3-0, but never 4-0. They have a chance to extend their season-opening streak Thursday against visiting Calabasas (0-1) before facing No. 12 Palisades (3-0) on Saturday.

Brentwood doesn’t play its first away game until Tuesday at No. 9 Chaminade.

El Segundo, meanwhile, must prepare for a visit from No. 6 Peninsula on Friday.