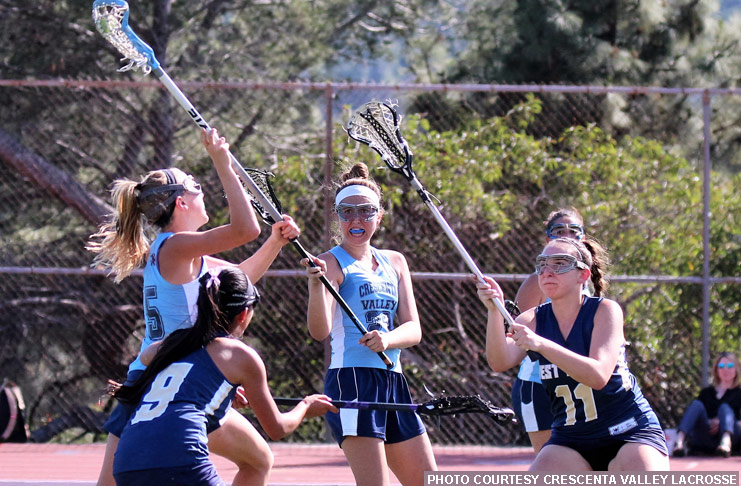 The No. 10 Crescenta Valley Falcons extended their winning streak to five on Friday, defeating No. 15 West Ranch 11-7 at Osborne Field. The win represents retribution for a mid-season loss at West Ranch and also clinches at least a share of the Pacific League Championship for the Falcons (10-3), who move to 3-0 in league.

The Falcons seemed to have complete control of the game early on, holding an 8-0 lead at halftime, but the team wasn’t comfortable.

“We all know how fast a game can turn,” assistant coach Eitye Sheklow said. “We led this team 9-6 at halftime a month ago and wound up losing 12-10. Something just didn’t feel right, [the Wildcats] have too many talented players and too smart a coaching staff to go away this easily, so we knew we had to stay on our toes.”

As if on cue, West Ranch scored the first three goals of the second half to cut the deficit to 8-3 with 18 minutes to play. CV scoring leader and senior captain Abby Sheklow broke the Falcons’ second-half drought with her third goal of the game about a minute later, providing some much-needed reassurance.

“The last game, we didn’t score in the second half until West Ranch had already taken over the lead,” coach Boz Crowther said. “There’s a huge mental difference between putting a stopper on the other team’s comeback and trying to mount your own comeback after giving up a solid lead.”

The Wildcats kept clawing, scoring three goals in four minutes following Sheklow’s goal, but the Falcons defense reasserted itself, holding their opponents scoreless for the last 9:33 on a day in which the temperature was hovering in the low 90s.

The Falcons displayed the distributed scoring which has been the hallmark of their season, receiving offensive contributions from Sheklow (3g, 1a), Lexi Ballard (2g), Peyton Marshall (1g, 1a), and one goal each from Leah Crowther, Angela Lulejian, Madeline Heeg and sisters Kimmie Foster and Allie Foster.

Crescenta Valley wraps up its regular season next week, closing out league play with a match at Westridge School on Wednesday and then celebrating Senior Night at home Friday against Valencia.