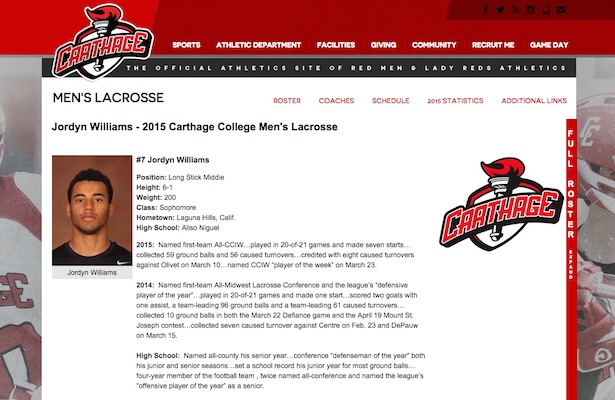 Aliso Niguel alum Jordyn Williams is getting national recognition as he heads into his junior season at Carthage College.  Williams is one of three Division 3 players identified by Lacrosse Magazine as candidates for having a a breakthrough season in 2016. LM says of Williams: “A do-everything LSM for a Carthage squad that earned its first-ever NCAA bid, the 6-foot-1, 200 pound junior could be the key if they want to make plans for playing in May once again. The Midwest Lacrosse Conference Defensive Player of the Year as a freshman in 2014 and All-CCIW last year after 59 ground balls and 56 caused turnovers, Williams can wreak havoc all over the field.”

Previous articleBarger Shines at Project 9
Next articleAre The USC Women Poised for a Breakthrough?
MaxLaxAll Lacrosse. All the Time.
Southern Section Boys